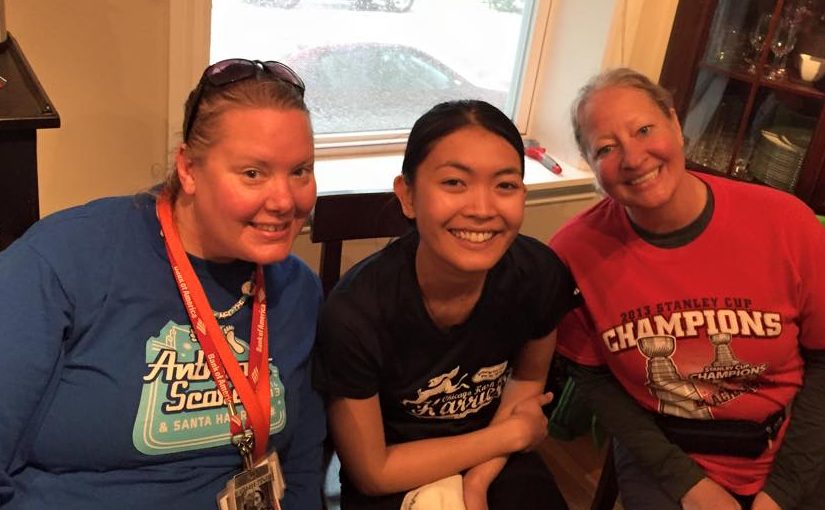 CHICAGO #1550 – It took the hashers a little while to get use to the camera, after all you never know when you are going to show up on COPS! According to CHICKEN STIFFER the camera was just there for some sort of Comcast Sports show (Runner’s Ultimate Network), although it is my personal belief that they were anthropologists, sort of like Jane Goodall. After some prodding, people began to open up and talk to the camera like BATTERIES NOT INCLUDED.
There were quite a few people that hadn’t been around lately that finally showed up after apparently learning how to use the internet once again. CUM IN MY ASSFAULT had been missing since Easter as well as JUST NORA, showing up for her second time (hopefully she understands that she is not going to get fed at every hash). ONE HANDED TYPIST and HOOKED ON TONICS also made an appearance to prove to the rest of the hash that they have not died or moved to Kathmandu. While those mentioned came fashionably late, others just came fashionable. Many had on their 30 Years of Hashing shirts from the weekend to include THE ENEMA CANAL, BLOODY THIGHS, PRINCESS LABIA, and JUST BRETT. JUST EMILY had the most interesting shirt of all with the words “Sludge Muffins” on it.
After some brief pre-intoxication the hashers were finally herded down to the alley behind Party Central so there could be discussions of marks. VIRTUALLY HUNG had already departed by that time and left the Chalk Talk to CHICKEN as the Brown Line roared past to drown out our introductions. With CHICKEN having no idea which way VIRTUAL went to, our Chalk Talk turned into our first Check. CROP DUSTER and MOLDY MAN SAC went north to look for trail while ENEMA decided to head south to look for trail only to stop dead in their tracks and head back. SUPER STUFF’HER, CUMS ON I LEAN, R-TARD-E, and JUST I LEAN slowly brought up the rear as they took turn wearing the manly doggie backpack and walking Beulah the non-drinking dog.
But what we all really care about is what happened afterwards under the guidance of CALVIN KLEIN and ENEMA. Due to all the virgins that had arrived, it became necessary to show them how to do a proper down-down, so we called out MORE TAIL and another hasher (who will remain nameless because he lost his Trial by Down-Down) to show the Virgins how to empty their vessels. You would think that people would learn not to wear new shoes but JUST ED noticed that ANAL ASSAULT had picked up a bright new pair of Asics. To thank him for his keen sense of sight we had him drink from the left as she drank from the right (now that’s teamwork). With all the hashers there it wasn’t unusual for there to be a lot of side conversations and we called out a few for being disruptive. It came to the RA’s notice that W’ALL BANGHER couldn’t keep quiet while HORN-E was reading a letter to the kennel so she was asked to keep quiet by Down-Down. Of course nobody learns so we also had to pull in ROTTEN WHORE for the same reason (surprise, surprise!) and then JUST BRETT who apparently defeated our arm-straightening pipe (the guy is just too big).
UPLOADER also received the fabled 10th run whistle so now he can tell the rest of us where true trail is. Finally, we had a very interesting take on Nellie Darling as we returned her book which was lost last week and chanted “You Suck” in between every line. So set your TIVOs to record on the 5th of July because that’s all the info you’re getting from me.
HARES (4): Chicken Stiffer, Virtually Hung, Calvin Klein, It’s Too Soft
VIRGINS (7): Just Brad, Just Ira, Just Leah, Just Ines, Just Kelly, Just Adam, Just Cari,
VISITORS (2): Hot Lips (Grand Rapids), Fuck Me til I Turn Brown (Boston),
HASHERS (52): Anal Assault, The Enema Canal, Just Brett, Just Amanda, Just I Lean, Risky Business, Cumma Slutra, Cums On I Lean, Batteries Not Included, R-Tard-E, Crop Duster, Salty Gash, Sit-n-Pee (Just Ed), Just Allie, One Handed Typist, Just Jenn, Just Eva, Moldy Man Sac, 867-5309, More Tail, Odor Eater, Rotten Whore, Bang Me Blow Me Get Me Off, Barry-o-man Loan, Just Bill, Dr. Poolittle, Bloody Thighs, Horn-E, Just Nora, Super Stuf’Her, Mouthful of Meat, Just Nettie, International Virgin, Princess Labia, W’all Bangher, Porcelain God, 2 Tickets to a Pair of Thighs, The Great Lochness Cockster, Stupidman (Kenosha Sucks), Cum in My Assfault, Just Emily, Sir Poops A Lot, Moan On Trail, Hooked on Tonics, Just John, Just Shari, Just Emily, Mount Schwiiinga, Carpet Shagger, Just Allison, Uploader
CUBS – 3
W. SOX – 0
TOTAL HASHERS – 65
LITTLE KNOWN FACT: Odor Eater cries everytime he watches “Little Women.”
_____