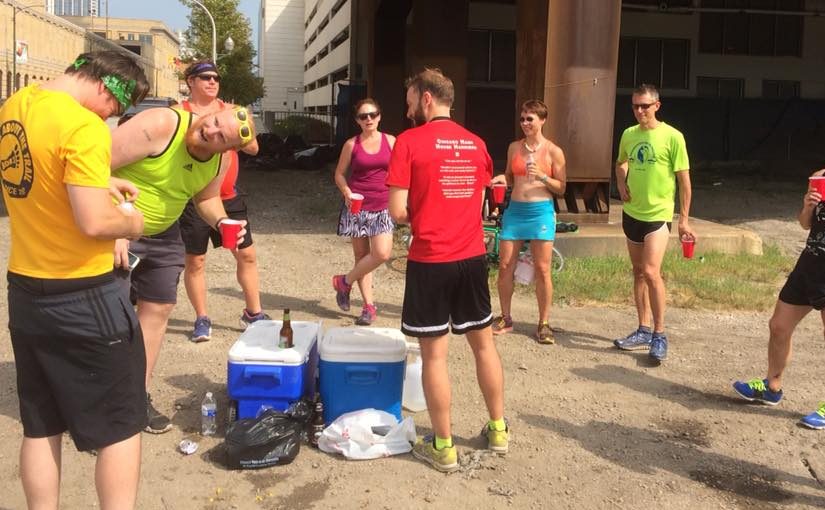 Hare(s): Chicken Stiffer, Calvin Klein, Fuji & Virtually Hung
Venue: The Party Central Skydeck – 933 W Wolfram, Rooftop (just NE of the Diversey Brown Line stop)
Hash Cash: Still only a mere $8 as we re-invest our savings from buying bushels of fresh tomatoes which for some odd reason are unusually cheap at the local market. Normal hash cash of eight bucks includes catered food and at least one keg on the Skydeck!!!!
THE Chicago Hash House Harriers will be celebrating our 30th Anniversary with Chicken Stiffer, Calvin Klein, Fuji and Virtually Hung takeing the pack on a scenic romp through the Lincoln Park “Green Zone”. This one’s at our doorsteps!
Join the Chicago Hash House Harriers as we celebrate THE Chicago Hash House Harriers’ 30th Anniversary this year with the CH3’s special 30th Anniversary Hash.!!
To help celebrate this great milestone we will be providing FOOD catered in and have a keg on the Skydeck too so you know we’re not gonna run out of beer. Don’t forget to call in sick from work on Tuesday! As a bonus we’re even gonna throw in a couple bushels of fresh tomatoes which for some strange reason were unusually cheap at the market this week…
ALL FOR ONLY $8 USUAL HASH CASH!!!
Environmentally-Friendly Public Transit
From Lincoln Park/Lakeview: Red Line to Fullerton, Brown Line to the recently re-opened Diversey stop (woo-hoo!!!), hoof it 1/2 block North up Sheffield and right (East) into the alley before Wolfram. Cross under the L tracks and into the first driveway to your left after the big fenced parking lot next to the tracks. Go up the back porch stairs to the Skydeck.
From Wicker Park/Bucktown: Blue Line to Logan Square. Hoof it a couplea blocks North to Diversey and take the Diversey #76 bus East to Sheffield.
Driving
Hop into your hooptie and cruise to Diversey & Sheffield. Side streets are resident zone permit after 6pm so best bet is Sheffield South of Diversey or Diversey West of Sheffield. Many meters in this ’hood are 9pm or Sunday check your meter before parking your precious sled.
______
From the Chicken:
Also the Comcast Sports Net running program that visited us On Monday and interviewed hashers and taped our run will air on JULY 5, 2008 at 5 pm before the SOX game. MAYBE someone will become famous.
http://runnersultimatenet.com/
Nice job everyone helping out for the CHICAGO HASH’s 30th Celebration. CALVIN and VIRTUAL laid a great trail. ONE HANDED TYPIST for the awesome beer stop. JUST I LEAN and CUMS on I LEAN for cooking. BATTERIES AND JUST AMANDA for beer wenching. IT was just a plus to have the TV CAMERA CREW around the whole night and hopefully we will see some new hashers join from the TV coverage. MOUTHFUL of MEAT for hare raising and finally ITS TOO SOFT for the use of the deck. Glad to see we had such a great turn out and DON”T FORGET we hash SATURADY and MONDAY this week.
CHICKEN STIFFER
CH3-GM
______