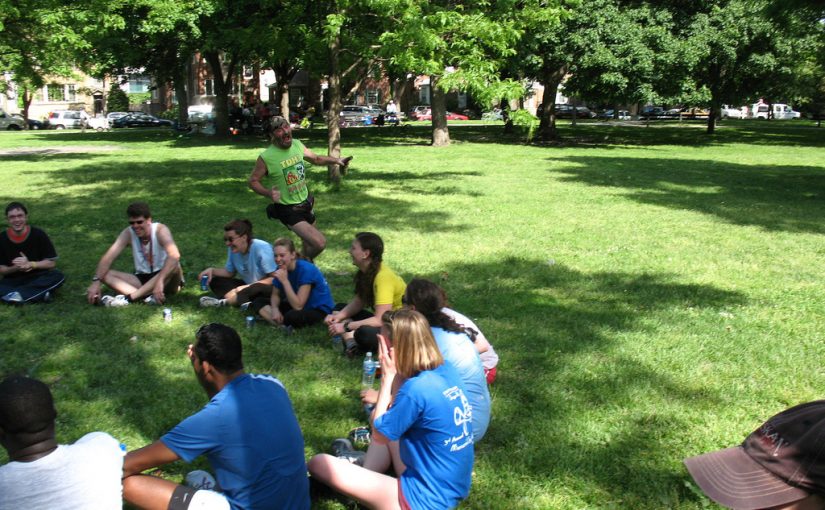 The Tale of the Trail
The Chicago Hash, 23 April 2011, by Horn-E
The Dark Kunt and Its Too Soft got a wonderful gift of good weather amidst one of Chicago’s rainiest and coldest Aprils in history for a roof top party over Its Too Soft’s condo. And the hibernators finally came out of their dens. We had 24 hounds at the start and one hound came late. The trail headed east in the alley and then east on Wolfram. Lifa and Horn-E led for the first block and then the front runners took over. At Halsted there was a Triple Split. Apparently trail somehow got over to the alley down the block. (?) Horn-E was at Diversey when it apparently was found, or was it? So he headed east a block and a visitor, Don’t Ask Don’t Tell came running at him yelling there was a Split. Looking around Horn-E spotted an arrow behind a pole and they were off to the east and then at the next corner, north to a Check at Clark. The pack scattered and no one went south, so Horn-E did. Only two marks. Heading north on Broadway he spotted the true trail coming out of the first alley, but the ranging hounds had already found marks heading east on Surf. Ice Capades led us along here until the next Split after a block. Trail was found to the north and then further east on Oakdale. We crossed Sheridan and headed further east and around a garage and over to the park. At the edge of the park was a Triple Split. Chicken Stifer was carrying the hash flag and headed south. I didn’t see him again until the beer stop. Meanwhile Ice Capades headed over to the driving range and found marks leading to a very faded out Check by the Mini Golf course. Horn-E and Tell It To My Nipples headed over to the tennis courts, but only found two marks. Tampon Tampoff somehow led the pack all of the way over to the lake. Was this a False. We came back from the tennis courts to see about the whole pack returning and running around the lagoon. We followed and Lifa came past me saying he hadn’t seen a mark since the first two blocks. Well, they were light, but they were there. We ran on south only to spot the pack returning north and over to the other lagoon. There was a Split. Poultry Fucker headed north so I followed. Naturally the pack went south. So I blew the horn several times until I managed to get Poultry Fucker returning and we headed over to Fullerton in time to see the last of the pack and the sweep, The Dark Kunt. We headed around the Zoo and finally entered the zoo and found a Split.
This was my down fall. As we searched south around the lion house, Batteries Not Included told me she saw marks earlier near her house. Way south on Clark. So Horn-E made the mistake of heading through the monkey house looking for marks on both sides. Probably visiting his relatives for Easter. He should have Passedover that part. No marks. But thinking the pack must have found something heading south while he was inside, he headed south. Nothing. So he used the best clue he had, never listen to a bimbo on trail, and headed over to Batteries Not Included’s house trying to catch up. Then it gets worse. Two blocks south he spots what appeared to be Cum In My Ass Fault, walking along and looking for marks. So he runs on, finally catching Cum In My Ass Fault. It wasn’t her. Damn. She was a jogger, same kind of hair and build. and unbelievably she was Asian. But not Cum In My Ass Fault. Damn joggers. What do they think this is, a sunny day. So, now, way off course, he returned to the park looking for the pack, circled another lagoon on the boardwalk and back through the zoo before finding a mark at the main entrance.
Back on trail, it was easy, following the trail. Found a Check at Oz Park, but solved that right away, got off course for a block, but soon re found the trail and On In to the beer stop at Its Too Soft’s Fullerton condo. And Chicken Stifer had one last beer saved for Horn-E. He needed it. From here it was a short walk On In to the finish.
Calvin Klein held circle on the roof and all was good. The beer was flowing and the sun was warm for a while. The hares got many down downs and Horn-E was called out for many well deserved reasons. Thanks Cum In My Ass Fault. We had four virgins, Just Kevin, Just Jeff, Just Chris and Just Chuck. I think I got that right. We had one visitor, Don’t Ask Don’t Tell. Fall On My Wood and Slippery Box ran probably their last trail. They are moving on. We had three house puppies in Way To Much Jism, EZ On The Ass and Just Rita and she got out a lot of good food for us. Who were the other trail hounds? Two Girls One Cupcake, SnatchSquatch, R-Tard-E, Just Andrea, Just Rob, Sandy Syphilis, Just Kate, Just Joan and Hoosier Daddy who ran only part of the trail before loosing marks at the park.
Later we went inside the condo and Calvin Klein re started the circle for a bit and we got into some good singing. SnatchSquatch did a good Allouette on Two Girls One Cupcake. We also did several others and Horn-E and Calvin Klein led a long version of The Engineer’s Song. Good time.