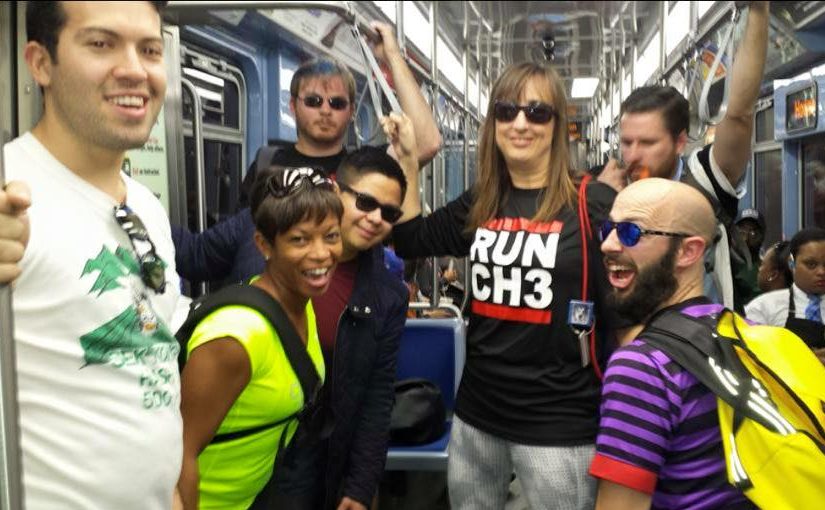 We hashed out of the corner Bar and our hares were Cumma Slutra and her sister, a virgin, introduced as My Sister Michelle. We had a pack of nine at the start and Rotton Whore was on her phone trying to give directions to a late coming visitor, Areola Borealis from Washington. They stood in the middle of the street three blocks away waving at each other. So it was a pack of ten, including two new comers Just Anna and Just Dana, and two visitors, Areola Borealis and Ass Ripper from Lansing and only six local hounds. We were off to the south and west and a bit of a loop and then to a Split going west and north. We couldn’t find this one for a while until Horn-E found a mark in an alley to the south. Huh. This led to a Split and Horn-E went wrong and over to Armitage. Running west he found a mark pointing east. Oooops. It was off of a Check and Horn-E checked it out and was way off course when trail was found to the east. Encountering Lifa along the way, they headed east and into an alley. Horn-E ended up way off course but finally caught the pack in an alley after a Split. We had another Check back on Armitage and Horn-E, 10K Tika Ho and Ass Ripper checked west. Meanwhile Lifa headed north. Glory Hole was seen to the far east. Not getting anywhere, I headed north to an alley and to the east I saw SnatchSquatch sprinting north. SnatchSquatch doesn’t sprint often and must have been on. SnatchSquatch was in pursuit of Lifa and Horn-E eventually caught SnatchSquatch as he was climbing a high fence. Soon he and Lifa were On heading west on Webster under the Kennedy Expressway. That underpass smelled worse then a Ghetto Hi-rise elevator. Hell, it was worse then the house of a woman with forty-seven cats and one overflowing litter box. Maybe even forty eight cats. We followed Lifa to past Elston to a Back Check 10. Lifa and Glory Hole finally led us to the north and through some gangway and finally to another underpass. I was really worried here, but Fullerton wasn’t to bad. At this point, Glory Hole was way ahead, followed by Lifa, Just Dana and Just Anna. All on the north side of Fullerton. Horn-E was trailing on the south side. Did you ever get to that point where you’ve had it. Horn-E did and started to walk. Getting to the corner of Western he could see the leaders heading further north and that was it. Horn-E headed south. A block later he saw Glory Hole on the west side of Western indicating he was at a Check. So. Horn-E was heading back and went this way from the bus and new were the beer stop was. He walked on and soon saw Cumma Slutra and My Sister Michelle sitting in this park. With beer. Lifa yelled to Glory Hole, “Are you going to let that old man beat you.” So he sprinted in and just barely beat Horn-E to the beer. And soon the whole pack arrived and we sat there in the nice warm weather until the rains came.
Back at the bar, Lifa got the beer going and SnatchSquatch led circle. Another shitty circle, but we got the hares, many times, virgin My Sister Michelle, visitors, Areola Borealis and Ass Ripper, new comers Just Dana and Just Anna and eventually we ended circle and just enjoyed beer On and On and On. Its Too Soft arrived late again.