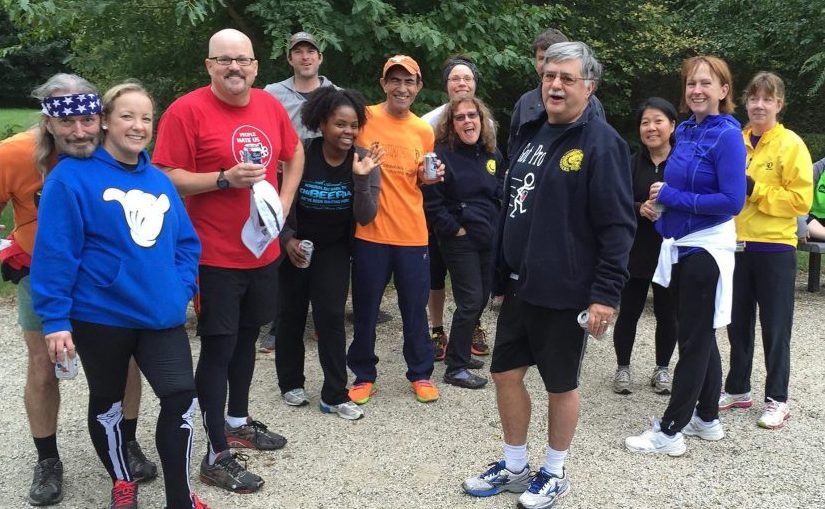 We started at the Purple Haze. Our hares were Lifa and Its Too Soft. Lifa warned us at the start that the shitty parts of the trail were the fault of the other hare. Hmmm. Shitty parts? And there would be something about 8 on the trail. So off we went to the north and east. Trail actually started off pretty good as we headed over towards Halsted and past there to Broadway. Were we headed towards the lake? Not. At Broadway, wwe headed south to a Triple Split and the trail actually headed back west. There was a turn arrow into a school yard parking lot and the pack was spread out heading west down an alley. But the hares were spotted heading west on the other side of the street. Sure enough, a Check Back. Well done you bastards. But it regropuped the pack. Horn-E found trail to the west and we were off again. We headed south to Briar and back to Halsted and the infamous six corner intersection. Horn-E was already getting tired from the after effects of the Eight Beer Stop Hash on the previous day and staying out until 3AM. That old fart ain’t dead yet, but getting there. Anyhow, this Check had us stumped good. Finally On On was called to the south. False. Damn hares. Just Michael, Horn-E and Crop Duster were West on Barry when the trail was finally found to the south on Clark. From here the trail went east on Oakdale all of the way to Sheridan. Hmmmm. Long straights. The pack regrouped at Sheridan and Diversey for a Check. Shiggy Packer finally found marks to the south east and up the sledding hill. EZ On The Ass relayed the On call and we were off. The trail headed south from there and straight to Fullerton. From the back of the pack Corn Star and Horn-E could barely keep the pack in sight as they streaked off. Around the lagoon and back into the city streets. Did I say long straights? This is where a pack can really get strung out for the back of the pack. West to Clark for a quick Check and on West. Finally we saw a BN. Liars. But then hares always lie. But eight times? This looked like it was headed for the Chicken Coop. No. Just a quick loop and south a whole block to Fullerton and again west to Sheffield. BN2, BN3, BN4. What is this teasing game? Now we were headed straight north on Sheffield for four blocks. Did I say straight trail? At Lincoln there was a turn south on Lincoln. Horn-E got as far as a block and a half, still going away from the finish and saw a BN6. All right, what is this. A BN7 on Halsted and a BN8 at Its Too Soft’s condo again. Not. Horn-E was a block from the real beer stop after BN6. What the fuck? But enough is enough and he started back only to run into Corn Star and they decided to work their way to Its Too Soft’s place. No one was there. Back on Sheffield and another five block straight. Along the way they spotted a BN8, but another false call.
Arriving at the bar, there was Chicken Stifer who lost trail somewhere. Also was SnatchSquatch who wasn’t about to run today after yesterdays Eight Beer Stop Hash, and Fistful Of Pricks. A short time later the pack arrived.
Beer was flowing and food was ordered and Shiggy Packer called the circle together. The hares were called early and often for the shitty trail. The hares still suck. Many down downs were given and we were finally introduced to our two virgins, Just Mary and Just Cindy. They liked the trail and said they will be back. Now we’ll have to get them on a good one.
Its Too Soft did tell me later that the reason for all of the long straights is that Lifa thought they only had a half hour to go when it was an hour and a half. Ratting on your fellow hare. Let the cat fight begin.
Who else was there. Tinkle Trotskie, Ice Princess, Ginger Snatch, Just Kelsey, and Beer Stop Valdez showed up several hours later.