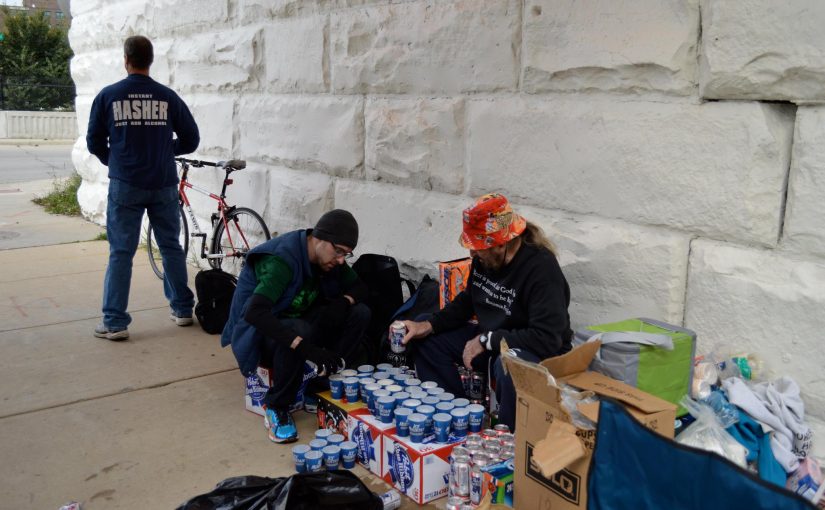 Every now and then the weather gods (good fortune) smile upon us and this past Sunday was exactly the case as we had great weather for the other hashes I co-hared (CH3 #1542 SkyDeck Opening Day in April, CH3 #1550 / 30th Anniversary in June, CH3 JV#2 Taste of Lincoln Ave in July, CH3 #1562 Labor Day) and now CH3 #1568.99 Hashtoberfest!! Despite running in a similar area, the mantra of the day was not to repeat the trail of Chicago’s September Saturday/JV hash just a few short weeks earlier.

Following the Prime Directive we started somewhere different from the get-go, so instead of Poitin Stil we went further South into the hinterlands to another totally new venue called Morseland just West of Sheridan on Morse as the pack gathered to watch the back end of shootout (when’s the last time you saw a 48-41 score in an NFL Football game??) between da Bears and their NFC North rival Vikings. Fittingly we had the largest visitor turnout to a CH3 non-major event hash in recent memory mostly from Minneapolis rooting for their Vikes!!! Double fortunately ultimately da Bears prevailed so we didn’t have to listen to their smack talk all night.

After newly-minted Thirstday RA Snatchsquatch led the chalk talk the pack headed straight East to one of what would be the first of several crossings of Sheridan to Loyola Park where a particularly subtlely marked check (the first mark was camouflaged by the artwork on the concrete bench) kept the pack confused for quite some time and was particularly punishing on any rangers as Horn-E headed South to Loyola, Calvin headed West to the L and Chicken Stiffer followed two false marks out onto the breakwater pier (did he really expect to find a third mark leading to the middle of Lake Michigan?).

The pack eventually found the trail and promptly ran like someone being chased by an F5 Tornado (whatever happened to noncompetitive hashing?) through the ziz-zag trail which eventually crossed Sheridan two more times, leading to a two block tour of the “Rogers Park French Riviera” also know as “Jarvis Beach” followed by a more or less direct run West to the Howard L station where W’all Bangher and Just Ira were waiting with multiple salvos of Jell-O shots in the self storage facility under the L. Once again she had way more shots than necessary as I think I had five! The pack then staggered North to Calvary Cemetery for a more or less straight West to East romp (after the last time where we zig-zagged several light years all over Hell & Creation through this half mile-wide cemetery) to Clark Square Park in Evanston where our co-hares had nice imported beer for stop #2 and we had a great photo opp of several hashers enjoying with their fancy import beers in front of the “No Alcoholic Beverages Permitted” sign.

After one or more hearty brews the pack headed South back to W’all Bangher’s wonderful casa right on the lakefront for some great food and a classic circle led by Jedi-Master RA Calvin Klein. Unlike most Sunday afternoon hashes, the post-circle partyage continued well into the evening, with much singing of hash songs and we even had to bust out the tiki torches to continue the party as daylight had long since departed. The hash finally ending when the keg was killed and the last beer consumed and locals and visitors alike left in good spirits.

Mad Props to W’all Bangher for not only opening up her fine casa to the hash (yes there are other goofballs out there too like me who don’t mind their places getting overrun by hashers!) and all the fine work she put into it, Snatchsquatch for helping me set the “Southern” part of the trail and finally Just Ira for her help setting the “Northern” part of the trail and beer/shot stop logistics. Too bad she only has a few weeks left on her six-month assignment in the US as she’s been flying below the radar heretofore, but after a breakout performance at 1568.99 could be one of the most promising rookies of the Class of 2008. Our loss is Germany’s gain.

This coming week the proven comedy team of Bloody Thighs and Virtually Hung hare once again out of our favorite Loyala University college bar, the Pumping Company for what I believe will be their 3rd or 4th Annual Halloween Hash. Bring your costume cuz there’s gonna be prizes for the best costume at the on in as well as candy!