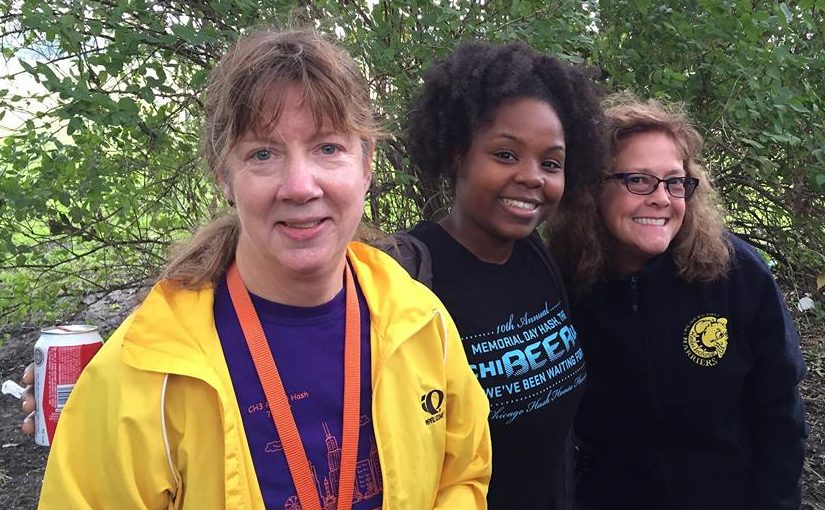 The hash weekend started with the hello To SMELL THIS and goodbye to BONER party on Saturday night. We had numerous people show up. HUMPY DUMBTY, SMELL THIS, BONER, CHICKEN, MOUTHFUL, SUPER STUFFER, LATE AGAIN, ODOR EATER, ROTTEN WHORE, ONE HANDED TYPIST, JUST CRAIG, ITS to SOFT, CUMS IN MY ASSFAULT and others for a total of about 25 people who came out for this CH3 drinking party.
This hash started at the famed J & M tap and was hared by our virgin hares JUST MOLLY and JUST KATHERINE. They had originally chosen a bar with no pitchers but made the fortuitous decision to call the GM and ask if this would be a problem to which I said Yes!! They made a good choice of making the J & M tap their ON-IN because we got $6 pitchers and some free pizza. The pack was off after we stuffed our bags in JUST ROBS truck. We welcomed JUST BALLS to the hash, a friend of MOUNT ME PUH�LZEE. The pack made their way to the outside and the hares did a great job in explaining the hash marks to our Virgins J CUBED and JUST JOHN. The pack ran down an alley and JUST ROB in his matching shoes and shorts lead the pack in the beginning. JUST STEVE was seen climbing every fence in sight much like MR. HYDE does in the movies. MOUNT SCHWIIINGA and BONER were holding down the back of the pack due to hangovers???? We ran by Clemente High School and crossed Division. The pack
made its way to Humboldt Park and ran around the lagoon. CHIP�N DALE was the leader at this point with our Virgins and found trail going west to the beer stop at the home of JUST MOLLY and JUST KATHERINE. They served us icehouse, which should have been called Warm House?? We stayed there for a few minutes while JUST MOLLY burned her fingers inside on the oven. She goes to U of Chicago and doesn�t know what an oven mitt is?? The pack was soon on out and LIFA was quick to find trail back to the bar with SEX LUTHOR and the GREEN GOBLIN.
Back at the bar the pack had to wait until the Bears halftime because the game started at 3 pm. If the NFL hadn�t changed the start time only the week before we would have run this hash at 1 pm so the pack wouldn�t piss of the bar patrons by singing during the game. This caused a few hashers to leave early and the circle was started around 5 pm, about 30 minutes after we got back. We punished the hares for such a wonderful trail. The FRB was JUST ROB. JUST STEVE was pointed out for being a racist in the hash because he was happy to beat JUST ROB to the beer stop. JUST MOLLY also accused JUST ROB for stealing JUST HARRSONS birthday cake but that is perfectly acceptable hash behavior so we made JM drink with her co-hare. We sent off JUST BONER to Florida with the song �IT�S A SMALL DICK AFTER ALL!!!� after he requested the song a 12 inch hard-on!! Nice try BONER!!! We welcomed J Cubed and Just John to the hash as virgins they are looking to start a hash in
Bloomington, Illinois. We wish them well and the Chicago Hash will support their efforts. WE welcomed back our 6-month reboot FROSTED DISCHARGE who has been running races over the summer. MOUNT SCHWIINGA has been busily creating the ANTHRAX logo for the hash this year and then the Circle was closed because the Bears game was back on. The pack was disappointed but I felt it was better to close the circle then risk making the regulars mad and anyways we did eat most of their pizza and ate JUST ROBS cake!!! Just to let you know he really did not steal it but it was a good story that many people believed? The pack proceeded to break up and BONER was really getting wasted. He even had to run out the back door to enter the spew-a-thon contest that was caused by JUST STEVES shot. PRINCESS LABIA showed up and we wished her luck at the Volleyball game along with MOUNT SCHWIIINGA. ITS TOO SOFT, BONER and I took off for home after we said goodnight to the Hares. BONER and
I picked up food and he stayed at my place but what was really funny was the program we watched on the BBC. Check it out if you have a chance. BONER was total enthralled with this show. SEE YOU ALL AND HAVE A GREAT TURKEY DAY.
http://www.bbcamerica.com/content/250/index.jsp