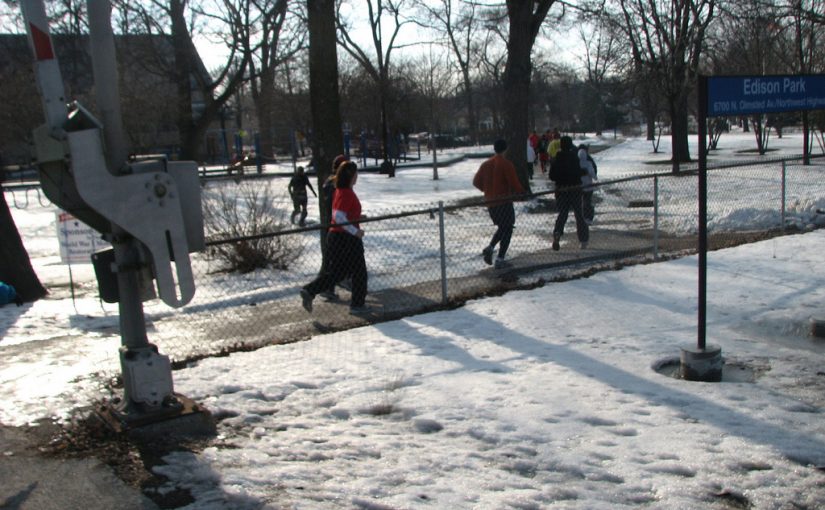 This hash was JUST LAUREN’s virgin trail and she said she wanted to do it all by herself and she did, but she did get a little help from PACKhER AZZ. What can you say the rain started coming down but we still had 21 hashers show? Don’t you people have homes? Don’t you know you can catch cold? If the weather was nice I guess we would have had our usual 35-40 hashers out on trail?

JUST LAUREN gave us a quick chalk talk and then we were off to the North. JUST CHRIS and I stayed back because we had seen trail already coming from my house to the hash. The pack made a left on Webster by Glascotts and was going towards McGee’s, but the pack missed the right turn towards the DePaul campus that JUST MOLLY caught. The FRB spot was taken over by JUST JENN and MOLDY MAN SAC and they went back to the corner of Fullerton and Halsted. The pack found trail going back to the OZ park area and soon lost trail completely in the park.

I don’t know whom but my Guess was JUST KATERINE found trail in the blackness going towards the Halsted and Armitage corner where we ran into a check. I found trail that went west with our BIG-HUMP visitor WHACK ON WHACK OFF but we quickly ran into a three way split he choose correctly and was soon leading the pack towards the industrial area south of North Avenue. The trail ended at a construction site near Joe’s on Weed Street and JUST LARUEN had a case of beer waiting for us. Some unknown hashers supposedly ran down ROTTEN WHORE? Was it JUST LAUREN? HORN-E? Who was this hasher? The hash had to crawl under the fence and drink their beer but because of the rain we were off in a few minutes. The FBI’s were JUST MOLLY and TRIPLE D back into Beaumont’s where JUST NICK began pouring pitcher after pitcher of beer for us.

CALVIN KLEIN convened the circle and the down-downs were on. JUST LAUREN was punished numerous times for the trail, followed closely by CALVIN for his shitty weather. ITS TOO SOFT arrived and was the NRB. SALTED GASH and PACKhER AZZ announced that POP VII was going to take place on OCT. 13, 2007. We also punished CALVIN, ROTTEN, WHACK ON WHACK OFF, and ITS TOO SOFT for visiting other hashes. JUST AMANDA gave us a good lawyer joke along with ROTTEN WHOERE so they got out of their down-downs but not so for JUST GARTH who couldn’t come up with one?? Are not lawyers supposed to be able to think on their feet?? TOO MUSH HEAD has volunteered to set trail next week so we will see what she comes up with.

On a side note gentlemen the ratio of girls to guys tonight was 12:9 these are numbers that would even make BONER giggle!! I can’t remember many hashes were the ratio is right around 50:50 and its had been this way for the last several weeks at the CH3. See you all at TH3 or next MONDAY!!!