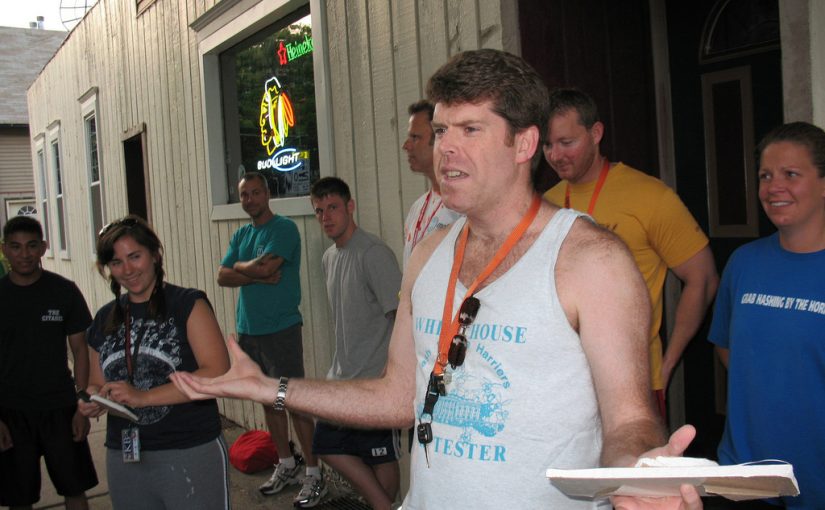 After a lively Mismanagement meeting about twenty-five harriers hit the trail set by Virgin Banger and Chicken Stiffer. They were joined on trail by honored guests PMS, Disco Ass, and Postage Tramp from the Big Hump Hash. We also welcomed Peacemaker from the London hash, ON ON visitors. After a quick circle that introduced two new marks to the hash called Eagle and Super Eagle the Harriers let out a collective groan, but started off on trail. Calvin true to the “FRB” that he is carried the flag to the front of the pack and was soon out of whistle range. The trail headed south away from the Lincoln Square neighborhood, and on Lincoln Ave., near the Jewel, the Pack got stymied by a tough check. 69 cent man called ON ON but soon tripped over the false that was marked heading south. Rearloader headed north but came back saying kind things about the fine trail that was laid by the hares. True trail was eventually found by Coffer, Tea or Me and Barks On All Fours even though they were handicapped with a baby buggy. From this point Milk My Yak assumed the position of FRB and took off down an alley. He was followed closely by the usually check hangers of Just Do me Slowly, Two Handed Stroke, CP, Cums in my Asphalt, and Eric the Red.

Soon the hash passed under Ravenswoods Advocate Hospital walkway and was on their way to the next major check on Damen and Montrose. Before they could get there they had to run through an apartment parking lot dodging garbage and verbal barbs thrown down by an irate Cardinal fan upset at the first two losses. At the next major check It’s Too Soft and Ballsalottapuss were found trying to catch the bus back to O’Lanagan’s but they were out of money so they offered to pay in Ass but EZ was no where to be found. On the trail went over the Metra line and back but it seemed that every split Virtually Hung took was a dead-end. The trail turned back south after going north along the tracks and Mudsucker was spotted again harassing young harrierettes on trail. Muff and Stroke rebuffed his advances and pushed on, sorry Mudsucker I call them as I see them. Finally the Hash found the beer stop at Virgin Bangers place where Pussy Galore, Mr. Cheesecake, Batteries not Included, and proprietor, Rent-a-Virgin were enjoying the sun and the beer. The irony of this whole twisted mess is that Peacemaker who walked the whole damn thing still beat the Cardinal fans into the beer stop this must be a bad omen for the redbirds this year.

The hash made it back to O’Lanagan’s where the circle was called and accusations were made. Our fine visitors from the Hump were made to drink early and often by RA, Calvin, So sorry for the SWEEP. The Circle questioned the absence of Horn-e and made Milk My Yak drink by proxy. Peacemaker serenaded us before he left for Mardi Gras in New Orleans, does he know it is already over??? Much drinking and singing were done and the hash seemed please by the end of the circle.