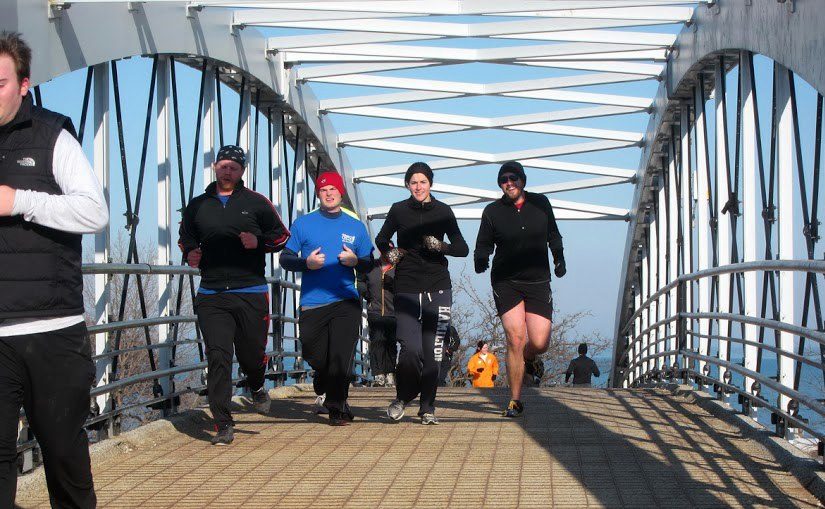 Where did all of the hounds come from. It was cold out. All right, we had two beautiful Harriets laying trail, Corn Star and Back Door County. But like typical bimbos, they laid the trail backwards and there was only one trail outof all Checks. No Falses. We ran out of Ravens and according to my list, that was 29 Trail Hounds.
We took off heading straight for Lincoln Park for a quick run to the Gazebo and a Check. I was a block behind when that trail was found heading straight west. This lead across Clark and into alleys, then southwest to Orchard and Lincoln for another Check. Again, I was just in sight of the pack when trail was found. Not running well, I found myself running west with Taste My Rainbow. All right, lets get this straight. We have a Taste The Rainbow. This was a bimbo from Tampa. So we headed south on Halsted and into Oz Park where we saw the pack again at Armitage, just when a Check was found, heading east. We followed and found a mark into an alley by the fire station, but nothing more. We did see the pack head south on Larabee so we headed over there and headed south until we found a mark at Wisconsin. Now the marks and Checks were no longer marked as the sweep headed over to the beer stop, leaving us on our own. We found a Triple Split and Horn-E had Taste My Rainbow head south and he went east. Trail went south a block and Horn-E paralleled. But after a block he found nothing. Taste My Rainbow started to come his way so he looked around and suddenly Horn-E saw O’Shitty Runch heading south a few blocks to the east. So we were On and headed east and then south. Here he saw the ranging Lifa heading back to trail and again we headed south to North. Huh. Anyway, to the east we caught a glimpse of the pack and headed east to Wells and north to a Check. We split up a bit and finally found trail heading into Lincoln Park at La Salle. A short time later we found the pack drinking beer at the lagoon. All right, a short story, but I fell behind and hardly saw anyone the whole way.
Back Door County did have Jello Shots along with plenty of beer. Then a park patrol came by and Tell It To My Nipples quickly poured out a whole beer. Waste. He needs to learn how to hide it better. But shortly after we headed out of the park and took a long walk back to the bar. And then we waited and waited as the Hash Cash, SnatchSquatch took his sweet time finishing his beer before walking back.
But we managed to finally get started and Beer Spill Valdez and Calvin Klein tag teamed as RA in a lively circle, chaotic, but still organized. Even Rhotan couldn’t disrupt it much. Licker Leash was the FRB. We did have several visitors, Spread Cheeks, Fuckerup and Taste My Rainbow, all from Tampa and Donut Hole from Near Houston and Occupied from Hawaii. We also had one virgin Just Jeremy. Welcome and come on back. The hares were called back often and Horn-E was called out by Soul Taco for leaving behind a ghetto condom. Now where it was left behind is our secret, but it did look like that missing cold wet sock from the last Big Dog Hash trail. The circle was so enthusiastic the locals wanted in and were learning how to put their drinks on their heads to get recognized. Finally two very intrigued locals were called into the circle, Just Kacey and Just Eddy. And she really did almost a full pint, and then about half of one. Now if they were only runners.
After circle, the pack got into playing a giant Jenga game with two by fours. It was going fine until O’Shitty Runch finally knocked it over trying to stack it ever higher.
Who were the rest of the Trail Hounds? Get ready for a long list. Pool Job, Tampon Tampoff, Magnetic Muff, Two Girls One Cupcake, Chicken Stifer, Poultry Fucker, Mouthful Of Meat, Dickens Cider, The Dark Kunt, Crop Duster, Mount Schwiiinga, Dark Side Of The Poon and Just Kate.
We also had five House Puppies with Wang Chunks, Its Too Soft, Ice Princess, Batteries Not Included and Calvin Klein.