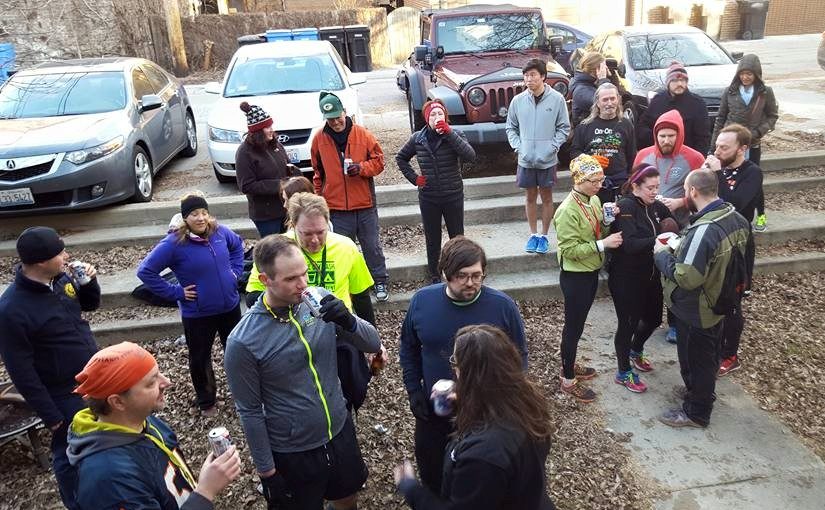 This was set by Chicken Stifer out of O’Lanagans. All right, it wasn’t a bad trail, but you didn’t read that here. The marks were mostly good considering the snow. Chicken Stifer wasn’t at the start, but we found marks and had a quick chalk talk. There was yet another small pack. Only three Chicago hashers, Lifa, Up Loader and Horn-E. We actually had more visitors then Chicago Hashers and we were joined by Prick Of The Litter, AC/DC, Morning Missile, and his sister, Escrowtum. We took off through the park and then headed west across Western. Lifa was leading here as we struggled through several marks that left us guessing as to what they where. Damn locals. But we finally headed south and back to Montrose, just east of the river for a Check. This allowed us to regroup as Escrowtum was more of a walker and she just arrived as Lifa found trail through a gate and past an apartment and to the riverside path. Somehow towards the end, the trail headed down an alley and Up Loader led us here. At the end of the alley was a car stuck in the snow. Lifa in all of his generosity, talked Morning Missile and the one armed plow truck to push the poor bastard out. Again, we almost all regrouped. We were now heading over to Western and then south. Horn-E tried to hold back a bit to show Escrowtum the way and lost track of the others. And as the trail started to turn at every corner, he lost track of her and what happened after that is speculation. And I won’t. Escrowtum finally gave up and went back to the bar. Horn-E tried to follow trail, through alleys, gangways and finally over to this hospital parking lot. There was this spray of flour. Was it a Check. Turn. Split, Back Check. Or even a BN. There were plows everywhere. Guessing a Check, Horn-E went west and out of the area, going back and forth and finding not another mark. Meanwhile, the rest of the pack was on the top deck of the multistory parking garage, hiding in a stairway, drinking beer. Back at the bar we waited about ten minutes before the beer stop crew and hare arrived. Along with Virgin Banger, Humpty Dumpty and some guy names Just Matt. All drunk. And Humpty Dumpty and Just Matt were carrying on like two thirteen year olds on their first drunk. Lifa tried to hold circle, but it was to chaotic and beer was being thrown around, including on the pool table. We ended circle quickly. But out hare got a few. We were also joined by another visitor, Just Edwin who might make the TH3 run this week and a hash on Sun. The terrible two, started to throw beer at each other and Virgin Banger finally got them out of the bar and into a cab. Did that cab end up on the news? We restarted another circle and had some fun. Finally shortly after six, the last of the Chicago Hashers left, besides Horn-E holding fort with all five of the visitors still there. We finally left around 8:30. And I want to thank all of the visitors for joining us, even though we only had three Chicago Hashers on trail.