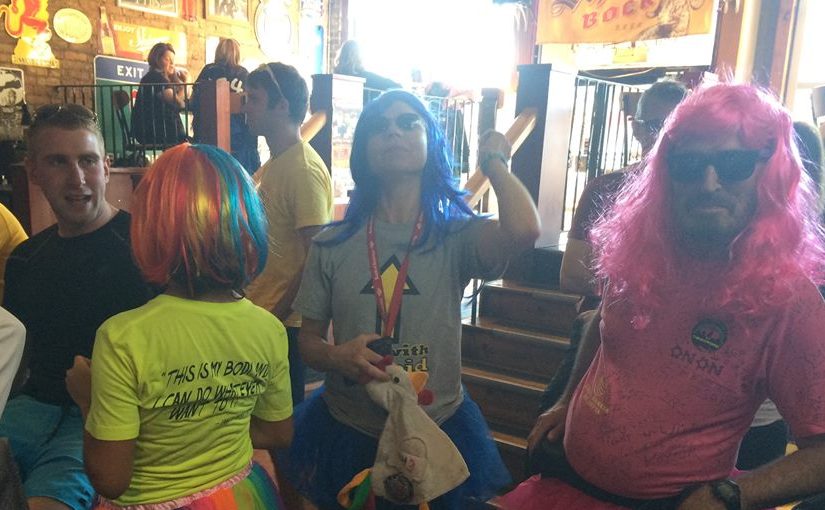 This trail was a live hare by Glory Hole out of O’lannagans. Another small pack of only 11 hounds that included one visitor and one virgin. So, only nine regulars. We took off in a small loop and back through the park and off to the north. At this point Crop Duster and Horn-E were playing catchup and we did under the El tracks. Trail went north to Lawrence and Western for a Check and Cumma Slutra found trail to the west and down an alley. The pack followed and even our virgin, Just Steve, was keeping up. Every once in a while I would hear this chattering coming up behind me. It was Hump Me Dump Me and Sandy Syphilis yakking like two old ladies at a quilting bee. They kept this up all through the hash and beer stop and circle. We headed north and down an alley heading east. As I got there, hashers were coming back down the alley. Must have been a Back Check. I’m glad to see so many hares are finally starting to use the Back Check lately as it is a great equalizer on trail and really can regroup the pack and gives new hounds a chance to lead. As we looked, Just Mary spotted a Check to the north. Great. We’re back of trail no matter how we got there. Horn-E went west and found nothing. Suddenly trail was found to the north and he paralleled for a block, just in time to see Lifa coming towards him. Got lucky there. So he led to the west and then north as Lifa caught and passed him. At Foster there was a Triple Split. Lifa went north and I didn’t see him again until just before the beer stop. Off trail again. Horn-E went west and was On. He headed towards the river and parkland ahead and Crop Duster passed him to lead into the park. This led to a nasty hare trick of a little loop and Crop Duster caught it. He would have led us out of there but he was soon chasing some young mom with her baby in the park. She already had one. She doesn’t need any more crops dusted. Meanwhile Horn-E wandered into the park and got us back on trail, temporarily. After a Split, he was practically on the mark heading north when he headed south to Argyle and the bridge over the river. At this point, our visitor, the infamous DR. Gonads, heard an On call to the north. Well, Horn-E paralleled to the west, assuming they would go west on Foster. Right. And there was a Triple Split coming out of the park/ball field area. Checked south. Nothing. Checked back east, over the bridge on the south side of it. Nothing. Checked west. Nothing. Damn hare. Finally headed south down an alley and was on. The pack still wasn’t in sight. Followed this trail south a block and back into the park and out at Lawrence. Trail went over the bridge to the east and then over the fence and a leap down of about four feet. Of course, you could just walk a little east and the wall went down to a foot drop. But I heard our tough Ex-Marine, Cumma Slutra, climbed over the fence and whined about the four foot drop. Or was it only three feet. But meanwhile, Horn-E ran ahead and spotted Lifa coming from the other direction and he spotted a Check. The ever alert Lifa had actually ran right past the hare sitting on a bench waiting for the beer stop. Yep. it happened just like that.
Now we had a problem. The beer was in the hares car, parked right across from a waiting squad car. Oooops. While we discussed options, the cop suddenly had to leave his hiding place and we quickly ran for the beer and took it into the trees where there were some logs to sit on and we waited for the rest of the pack. All was good. And they stumbled on it, Corn Star, SnatchSquatch, Just Mary and the rest of them.
It was here we heard the story of our visitors celebrity. Dr. Gonads was the infamous hasher arrested and almost prosecuted for laying Anthrax, or terrorists substances in an Ikea parking lot several years ago. This was a big story and hashers donated several thousand dollars to his defense fund.
From here it was a long walk back to the bar where we were met by the usual and unusual groupies, Batteries Not Included, Calvin Klein, Its Too Soft, and ‘musical note here, Ten Dix With Wings. Then Calvin Klein held a circle. Two good highlights, Our visitor sang several songs including one made up for his adventures with the State’s Attorney from the dark side. And when Batteries Not Included heard who he was, I thought she would either have a kitten or an orgasm, yelling ‘its you, its you, its really you’. Our visitor was introduced, Just Steve and he got several down downs. He is a journalism student at Northwestern and wants to write a story about the hash for school. Here we go again. Infamy or notoriety. Use hash names only, to protect the innocent and guilty.