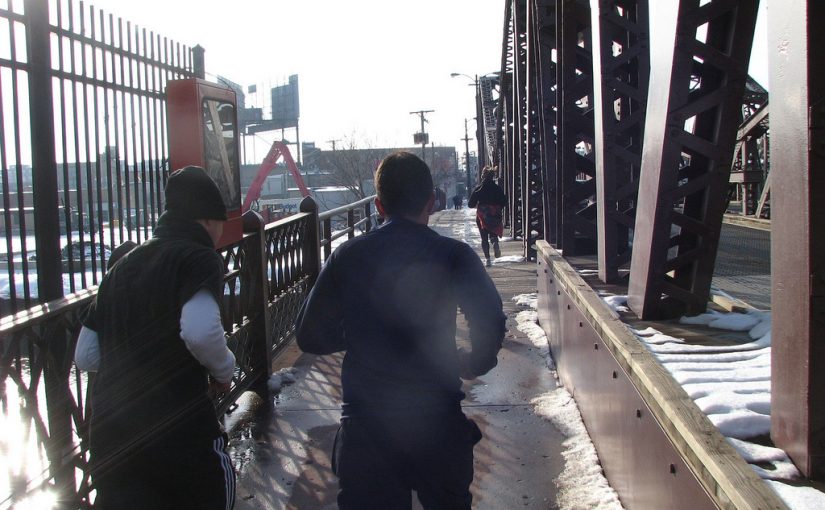 We hashed out of Clarke’s and Slippery Box and Fall On My Wood were our hares. That left eight hounds at the start and one late comer Glory Hole whocaught the back of the pack at Wellington and Lincoln. We started out to the south with a mad dash through De Paul to a Check at Belden. This took a while to solve, but finally I heard Lifa calling On to the west and we ran on to Kenmore and then north to a Check at Jonquil Park at Lincoln and Wrightwood. By now we thought it was The Dark Kunt who led us here. But in Checking, Crop Duster was seen returning from the east and yelling that he already checked out everything east. Damn stealth FRBs. Horn-E then ran through the park to the north entrance and heard Lifa calling On to the west. and as he ran that way, he found marks that came from the east (?) and we all headed north on Seminary. Well, you get the idea, as we wound around all to familiar territory.
The marks were a little hard at times due to turns hidden around corners and in shadows. This almost led to a missed shot stop. Generally, marks should be easy between Checks and Splits so the runners can easily run without having to check around each and every corner. Along the way we missed one of these marks that apparently led across the street, from south side to north side. Having missed this turn, we ran on over a block before realizing we were off trail and there wasn’t any marks. If the lead runner was just a half block further he might have crossed the street and seen marks. These marks were after a shot stop. Some of us did walk back on trail before we crossed the street and Horn-E managed to see a turn into an alley. This was a quick loop down the alley to the shot stop and back to the same street. It could have easily been missed. Point: Don’t make you turns hard to see. You yourself would get pissed if you missed turns and especially a shot stop, and you wouldn’t be happy if you sat at a shot stop that no one found.
After the shot stop we were back on and up to Diversey. Here we had another Check that split up the pack. Several were off to the west. Someone went north and found a turn to the west and eventually On. But that person didn’t return to the corner to call out to the waiting pack, that left four Horn-E, Just Do Me Slowly, Corn Star and Just Ryan standing there. We finally headed north when Horn-E noted that someone disappeared up that way. This almost permanently split the pack. We followed trail north to Wellington and Lincoln and another Check. This was marked and we headed west only to find the FRBs returning from a False. Back at the Check, we restarted checking. Horn-E went north with Just Ryan and found only one mark. Vote For Pedro did the same west and northwest. Upon returning, the pack was gone and no marks. About now we were joined by Glory Hole who came north on Lincoln. That left only one other way out and we headed south on the other side of Lincoln and found trail in an alley. Glory Hole left us behind. Damn fast SOB. Vote For Pedro was off on a parallel. Somehow Just Ryan and Horn-E were left alone in back and we hit a Check at Sheffield. Horn-E found trail to the east and went back for Just Ryan. It was only his second trail and we don’t want to lose newbies. Then we went to a Split at Diversey. Suddenly, Glory Hole and Vote For Pedro came up behind us. How we got ahead of them is beyond me, but I need to learn how to do that. From here we headed east and then south and finally to a Beer Stop in a little park on Wrightwood.
While we were drinking beer, and being noisy hashers, Vote for Pedro told us how a couple of old farts were on their porch bitching at him for running through a “QUIET” neighborhood. Fugem. But the more interesting part of the beer stop was Glory Hole and Crop Duster mounting The Dark Kunt in the dark. Just Do Me Slowly was blushing so much she lit up the area and they had to stop. Damn. Just when she was starting to squeal. So we finished our beer and went on to Clarke’s .
Back at the bar we found the usual late cumer, Its Too Soft and Way To Much Jism who quickly joined our pack. We gathered in the back and got into a lively circle led by Lifa. We were there to hash and circle and drink and the blaring TVs were virtually ignored. Yeah!!! After circle we drank more beer and ate and all was good.