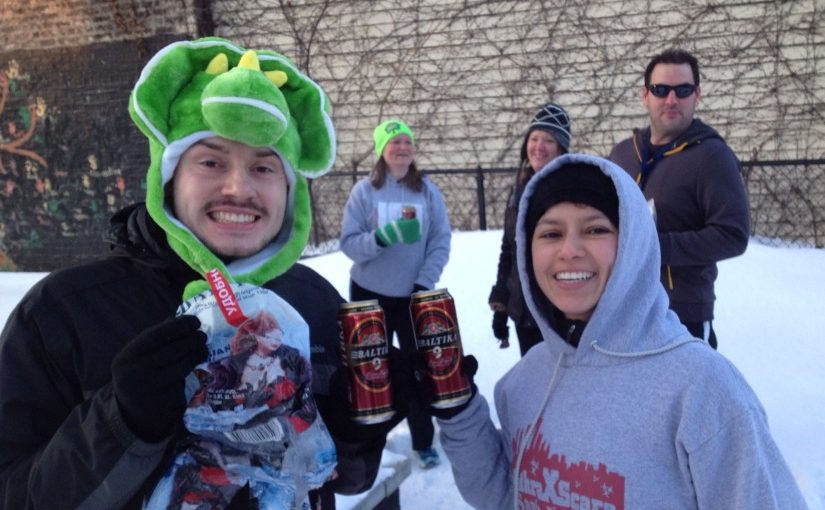 We ran out of Martin’s Corner Bar and our hares were Just Lucky and Corn Star. I’d like to say well done ladies. I’d like to say a lot of things. But the reality is just another shitty trail. But I will give the two bimbos credit for taking us into some real new territory. We haven’t been treated to so many odors in years. From the wild alleys to the Garbage Truck Parking Lot, to the wonders of all of the roadside food stands.
We started out to the south with a nice little band of 13 hearty hashers and Horn-E. We were soon at a long Check at 24th St. This led us to the west and I spotted Lifa going for a short cut. Who? Lifa? But the trail did loop back and I followed Lifa and we were soon behind Tampon Tampoff, Genesis, Crop Duster and a few other FRBs. Another Check at some tracks regrouped the pack a bit but we were soon off to the east and a little loop that put us right past those damn garbage trucks. But we were heading out of the industrial area and back to neighborhood streets. I found myself trailing along with our visitor, The Big Shaker from Oslo Hash in Norway. It is always great meeting these visitors and realizing we know many of the same hashers from all over the world. Genesis finally passed us and slowly disappeared in the distance. But we were safe, Our hare, Just Lucky was following and we weren’t lost. It was about Cermack and Paulina where we finally caught the pack. They had a Triple split and found one mark straight north, but none after that. Oooops. But the pack was whole again and we again started to range. Genesis and Horn-E kept going north and finally the On call came from behind us and into an alley to the east. So we headed east and a block later the pack was again lost. Unable to find marks. Horn-E ranged a bit north and found a turn arrow from the west. Whatever, he was On and blew the horn. Genesis blew his whistle. And no body followed. I think they headed off in that loop indicated by that turn arrow. But we were On and after a block, Genesis took the lead and led us to a park. Trail headed right into the middle of the park and then a big loop to the north and west. Horn-E started to short cut towards the FRB and finally spotted the rest of the pack following. Blowing the horn continuously, many managed a short cut and we headed west for a block on 18th. Then east for a block on 19th. Then west for a block under the Pink Line tracks. Finally we headed north on Hoyne and there was a beer near. That wasn’t there when I got off of the El. But a few blocks later we were in a back yard drinking beer. And there was Pied Piper. He was on the train right behind the one I was on and as he got off, he caught Corn Star laying that last little bit of trail. So he just waited with her at the beer stop. And just as we were about to leave, Cum In My Nurse came along. DFL, but he managed to do the trail. And so, we had a pack of 16. Back at the bar, Genesis got the beer flowing and started circle. Just Lucky brought out a five pound bag of peanuts and we slowly trashing the place with peanut shells. We had two non running wussies, Slippery Box and Wang Chunks. The rest of the pack included, Lick’er Leash. , Five Hole Failure, Just Sarah, Ice Princess, Way To Much Jism, Ginger Snatch, Just Michael, and Just Ray. Well done, ladies.