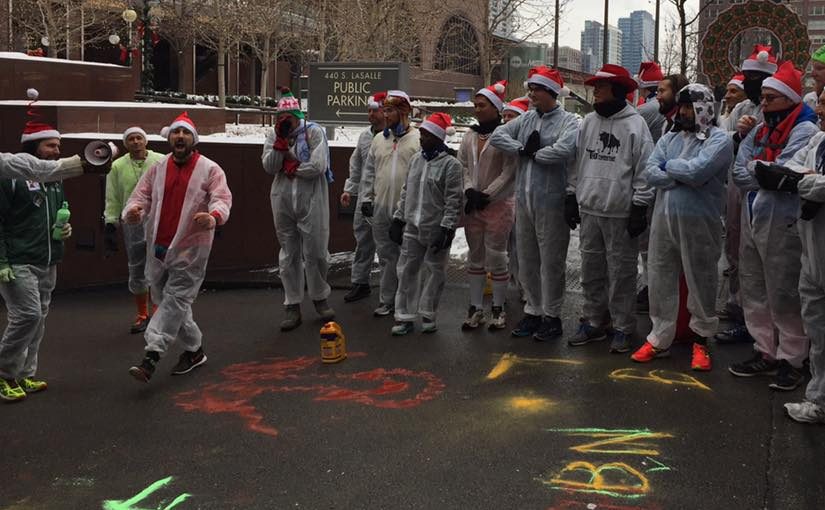 We were to run out of O’Malley’s West. Not a good hash bar as we learned later. Why it was up for bar of the year was beyond me. Our hares were Chicken Stifer and Fistful Of Pricks and there was no trail laid. Chicken Stifer headed out to lay a trail a little after 2PM. Would we be stuck with some crappie hangover trail? We weren’t hungover. But 12 hounds took off on trail. Trail headed west and wound through all to familiar streets and alleys. But it wasn’t a bad trail so far. There was even a loop through a gangway that worked. And all to soon we were heading back towards Oz Park, a block from the bar. Is this where we would be met by Fistful of Pricks and a beer stop after less then a mile and a half. But no. There was a Check. Sperm Diversion headed east and found a Split, He went straight so Horn-E headed south and he was On. We were leaving Oz Park. Where we to actually have a trail? This led to an alley and a Check at the exit of the alley. Horn-E went south on a long block and finally the On was called, to the east somewhere. Upon returning, everyone was gone. Horn-E circled the block and at the alley by the fire station he spotted Just Valinda at the far end. She was waving that she wasn’t on and returning. So Horn-E went around the fire station and headed south and soon was back on trail. We headed west and found Corn Star at a Triple Split. She checked to the north and found nothing. Horn-E headed east and found trail heading north in an alley. And so, the three of us just followed trail trying to stay together and help each other. Horn-E was mostly in front and found a Back Check. At last we are seeing more Back Checks being laid without numbers and the way they should be laid. This lead to a trail through a maze of town houses and finally toward Webster and Clark and a Check. This lead us north and west and it became obvious the trail was no longer a trail but just following marks to the inevitable beer stop at the Chicken Coop. And just as we arrived, the late arriving Lifa joined us, as DFL.
Upstairs we found the pack sitting around watching TV. Hey, this is a hash. So Lifa, Sperm Diversion and Horn-E sat by themselves and talked hash stuff.
Back at the bar, we found the bar was full of stool potatoes. That is couch potatoes but in a bar. Every table was full and people were eating. This would not be a good place for a circle or to even hang out. But Fistful Of Pricks bought beer and Chicken Stifer pleaded on bended knee and they finally let us into the upstairs bar for our circle.
Genesis arrived and started the circle and the usual shit happened. We were introduced to out virgin, Just Amanda, brought around by Ass Capades. Batteries Not Included and Calvin Klein arrived to drink with us and immediately called out the Cub Fans for a down down because the White Sox beat them. Who fucking cares. Please, lets not having a running score on all of these teams all summer. We are a hash.
We did get around to naming two bimbos today. Just Valinda found some Costa Rican money on trail. 1000 something. And just like a little Costa Rican hooker she picked it up. Worth about $1.83. And so she got named 1000 dollar Costa Rican Whore or was it 10K Tika Hoe. Or something like that. We’ll see how that settles out. Then we named Just Allison, for her adventures with a New Zealander. SucKiwi. I will let that go at what it is.
Other hounds included Its Too Soft, R-Tard-E, SnatchSquatch, Crop Duster, and Free VD.

There was also a Hash Ball the night before. We have really slipped into just a party and it is no longer anything resembling a Ball. The bar was too loud, (the DJ sucked. Where was Odor Eater? Or yeah, getting drunk) the belly fill was just that and the beer was only Coors. Or was that Coors Light? Even worse. Remember a few years ago when we had Milk My Yak’s home brew. Damn good. And before that, the Ball was in a banquet room. The award winners from the Hash Ballot were announced. Fistful Of Pricks is the new Chicago GM. Check them on line. And why weren’t the write ins included? What were they? They sometimes out polled names on the ballot. I noticed that a bunch of paid people never even showed. Batteries Not Included and Calvin Klein didn’t pay and were listed as coming. They saved $30. There were some in costume and some of the better ones were our own Corn Star as our own Corn Star. International Virgin all decked out in white trying to win again. Slippery Box in a slippery box with some Vaseline. Beer Spill Veldez as a Mexican spilling beer. Chicken Stifer fucking a chicken. EZ On The Ass with EZ on the ass. And Genesis as the Hasher Of A Thousand Names. There were a few others, but most of us didn’t dress up, including myself. I dress as Horn-E at every hash, so I thought I would just dress as myself for this one.
I finally left, early. Couldn’t stand the noise from the DJ and the Coors. Went to Friar Tuck’s for some good Michelob Amber and Sultry Skanks.