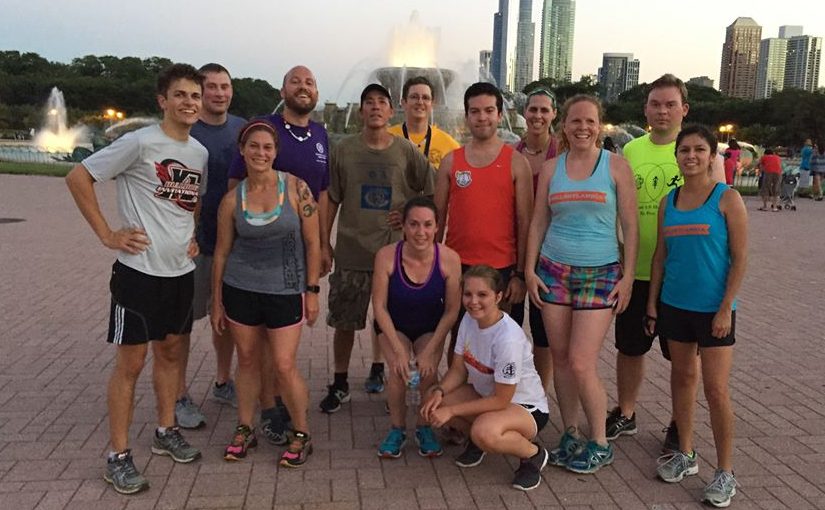 It was a great 30-degree day to run and our hares gave us a nice trail. VIRTUALLY HUNG just game of knee surgery on Friday so he was not up to his usual long trail. Hopefully his knees will be back to normal soon and were not damaged by his down down he did on his knees. Our other hares for today were the usual crowd of BALLSALOTPUS, ASSFAULT, and JUST DO ME SLOWLY. Beer, presents, food, and a great trail for $8 who can complain about that hash cash amount now!!!

Some hashers were late for the hash having played kickball in the morning. ITS TOO SOFT, BLOODY ASSHOLE, SALTY?, MOUTHFUL OF MEAT, and others were getting their exercise early then normal today. Eventually they made it and we circled up outside. The trail ran south and I had picked correctly while others like Horn-e had chosen the false trail to the east. I was running with ASSCAPADES and CROP DUSTER until we came to the first check and here the trail wound through some dilapidated buildings and broken gl (ass) was everywhere. Maybe it was left over when Magnetic Muff kicked Ez on the ASS’s ass from the TH3 hash? I believe at this point LIFA was leading us across one of the many branches of the Chicago River; he was closely followed by MOUTHFUL of MEAT, ANAL ASSAULT, JUST KELLY and others. We got to another check on Cermack. Here CROP DUSTER and I choose correctly again and we ran south next to a train line and under a viaduct. 69-cent Man was sure the trail would hit the parade route but he was lost and disappointed because it did not.

CROP DUSTER at the next check guessed correctly and was rewarded with true trial going north after we ran between some buildings. Eventually we came back out on to Cermack and crossed over by a Walgreen’s. Our FRB today was LIFA and GLORY HOLE. There was a Chinese Lincoln town car waiting for us at the beer stop handing out rolling rock and chiang tau beer?

It started to get a little cold so VIRGIN BANGER, POULTRY, GINGER SNATCH, others and I high ox-tailed it back to the bar. BALLSALOTPUS worked it out for us to have a keg in the bar and that worked great seems like the keg lasted until 6:30 pm tonight. LIFA got the circle going and called in our FRB’s and DFL’s. We said hi to our new virgin JUST HALEY from Wicker Park I believe. SALTY GASH drank fro being a reboot from POP oh my and she even got her 30th anniversary hash tag!! We got the circle over with and then proceeded to hand out prizes for the waffle. FUJI was snapping pictures and got a good shot of IV, Motor whora, ASSCAPADE, and SNATCHSQUATCH in their pointy hats. The dinner gong was hit and the hash inhaled the fried rice and egg rolls. The hash was now watered and rested ready to watch the SUPER BOWL. See you next week when ANAL ASSAULT comes back to lay a trail for us out of the MURPHY’s BLEACHERS.