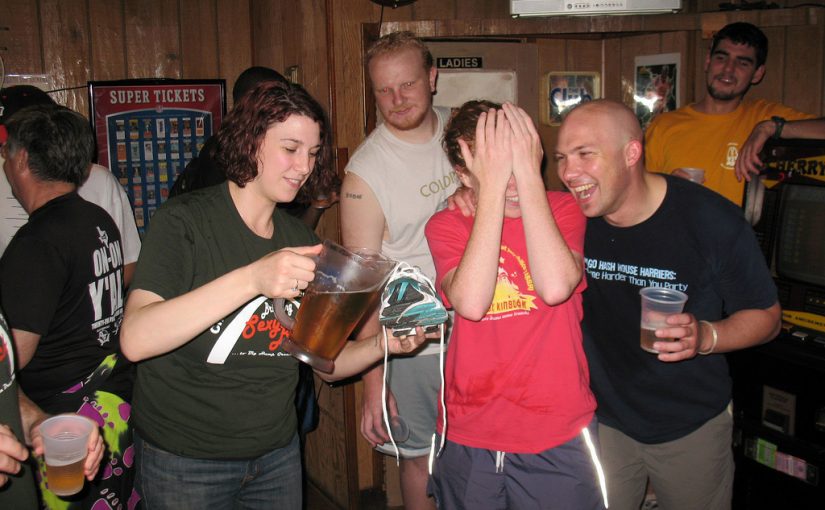 This hash was billed, as the retirement hash for STUPIDMAN and it was. 31 hashers came together this past Sunday to honor a man, a very stupid man!! LIFA and STAB’em and SLAB’em were our hosts and hares today they prepared a fine trail with venison brats and beer for us at the on in. The hounds were particular grateful to see a keg tapped before the hash started, take notes here Mr. ITS TOO SOFT, keg before a hash nice idea so hounds can get a beer. LIFA gave us our directions but with very little flour left in his bag the marks were confusing to JUST EMILY our virgin so we told her to follow HORN-E, seriously we told her to follow the pack. After the chalk talk we gave our introductions but one teacher, BLOODY THIGHS couldn’t wait her turn and spoke over THE ENEMA CANAL. I know he has been gone but can’t you give the guy a break Ms. THIGHS and allow him to tell us who he is so we can remember? After this little incident LIFA pointed us north and the pack was off. HORN-E was in front for the first ¼ mile because he pre-scouted trail and he was not even a hare tsk-tsk. CROP DUSTER, HAPPY ASS GRABBER and I ran thru an elementary school playground and were on on the far side of the school. Trail from here went east towards an over pass for the train. BLOODY ASSHOLE and HAPPY soon found trail leading to the SW but that turned out to be a false trail and our good friend CROP DUSTER fell face first into the F. BLOODY ASSHOLE and I again picked up trail behind a convenience store and found it still running east towards Jackson Park. The pack crossed BLUE ISLAND road and found itself at a check near the CHICAGO WORLDS FAIR STATUE. BLOODY ASSHOLE and HORN-E found trail going east put that was a false trail. CUMMA SLUTRA and I found the rue trail crossing over a bridge onto the Japanese Gardens Islands designed by Burnham for the worlds fair. The check seemed to get most of the pack caught up or some short cut trail like WRAPPER SNATCHER and PORCELAIN GOD. HAPPY with TURBO dog were back at the front of the pack with ERIN GO BUFF, BLOODY ASSHOLE, SMELL THIS, ASSCAPADES and I. We ran through the University of Chicago campus and I was disappointed that we didn’t try to run by the Obama house. It would have been interesting to see what the police would have done to LIFA when he put down a mysterious orange powder in front of his house? At this point BLOODY ASSHOLE was shirtless and we didn’t need to see anymore skin so after a long straight away BO, STUPIDMAN, LIFA, STAB’em, and others meet us on a pond for a quick beer stop. We waited for fellow hashers and soon CROP DUSTER, HOOSIER DADDY, CUMMA SLUTRA joined us and then finally HORN-E crawled in.

It was rather chilly so many like SMELL THIS and I started to meander back to the on-in before the pack all got to the beer stop and we caught PRINCESS LABIA, BLOODY THIGHS, and TOO MUCH HEAD bagging the beer stop to get back in the warmth of the house but can you blame them? We got back to the house and had a few beers before we circled up in the spacious basement of STAB’EM. Seriously, the ceilings were so tall that MOUTHFUL of MEAT could have touched the ceiling with her hand!! This proved to be a huge obstacle for the GM/RA for the day luckily there was a track of higher ceiling I could walk back and forth thru while conducting the circle being careful not to crack my head open. MUCH thanks goes out to ERIN GO BUFF and HAPPY for refilling numerous pitchers of beer while the rest of the pack enjoyed the circle. Our FRB today was CROP DUSTER and HAPPY and DFL was JUST JANA. CROP DUSTER fell down and went boom on trail so he got a down down. STUPIDMAN on this day was serenaded by LIFA to the tune of RULE BRITIANA, congrats my man enjoy the retirement you earned it!!! ODOR EATER was the quintessential non-running wussy, and TOO MUCH HEAD was the hare by proxy for most of the night. Due to the shittyness of the trail she drank a lot for STAB’em today. Our late arrivers were SPECKIE, SQUEEZE THESE, IT’S TOO SOFT, and ARE THE REAL, who consequently was immediately thrown back out of the house to find more beer for us which she did!!! After a despicable circle we did some religion and retired to the upstairs for brats and beers!! CHEERS