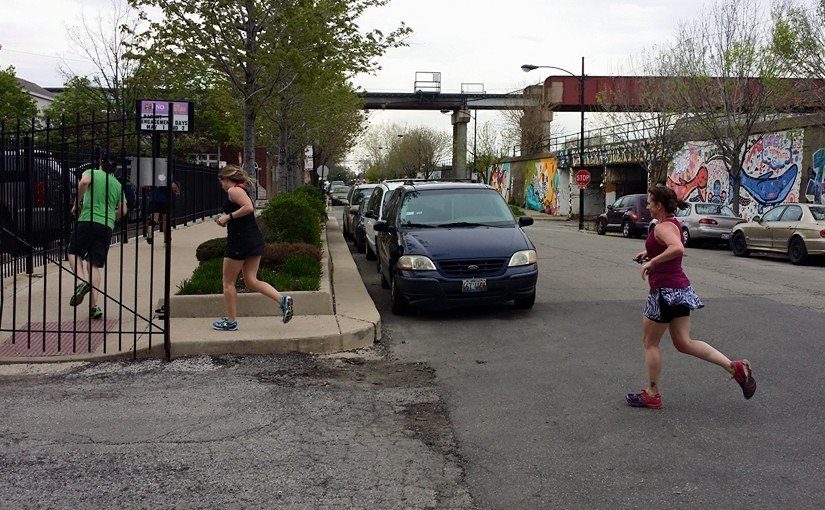 The trail started from Glascotts�s bar but wouldn�t end there. The Hares made some great decisions by having a beer stop outside as well as the ON-IN be outside in 60 degree weather in the middle of January!! SUPER STUFFER and MOUTHFUL OF MEAT laid a great little trail that wound around the south Lincoln Park area. They even found a ON-IN bar that had free parking next to the bar!! The pack was lead by CHIP-N-DALE most of the day until he had to stop and write tickets for parking offenders. You see on top of his tight running pants he wore what most Chicago meter maids wear when writing their tickets, I guess at least you could see him? JUST I LEAN was being very manly and helping JUST ALLISON find her way around her first hash. JUST ROB II seemed to run the hash in penny loafers and jeans, I thought we already had a HOT PANTS? We were happy to see JUST TOM make it back for the first time since the ANTHRAX hash of 114 people. TOTALLY BUTCH was back from her win in
IOWA maybe we should have named her BARACK OUT WITH YOUR CAUCUS out? The hash made it to the beer stop where JUST ROB II took on JUST MOLLY in the shotgunning contest and totally annihilated her. It was so warm out that JUST JONATHON and JUST I LEAN played Frisbee in OZ park. CALVIN was in dismay that we left the beer stop and still had beer but many wanted to get back for food and warmer clothes?
The ON-IN was at KELLY�s PUB in their back area. We totally surprised our visitors UPLOADER, SCHNITZEL SQUEEZER, and JUST MARTY with all the hash songs we sang. I know I was horse by the end of the night. MOUNT SCHWIIINGA played the part of a comely beer wench this night and I thank her for it. CALVIN ran the circle and soon called for the virgins JUST MARTY, JUST ROB, and JUST ALLISON into the circle for their down-down. CALVIN asked MOUNT ME to demonstrate a down-down but all we got from him was his impersonation of �THAR HE BLOWS� from MOBY DICK? Maybe we need to rename that man. Anyway after the MOUNT ME debacle the virgins sucked back their beers nicely and we continued on for another marathon circle. TRIPLE D was called in for being a reboot while CHIP-N-DALE had no hash gear on? YAK was made to suck down his good beer and BARKS drank for being so beautiful. PACKhER ass drank for flogging behavior on New Years Eve and BATTERIES was giving away old hash
shirts. Eventually the hash came to a close but not before ITS TOO SOFT laid a big one that cleared out the entire bar area and made the fire department show up with gas masks on and hazmat suits at the ready.