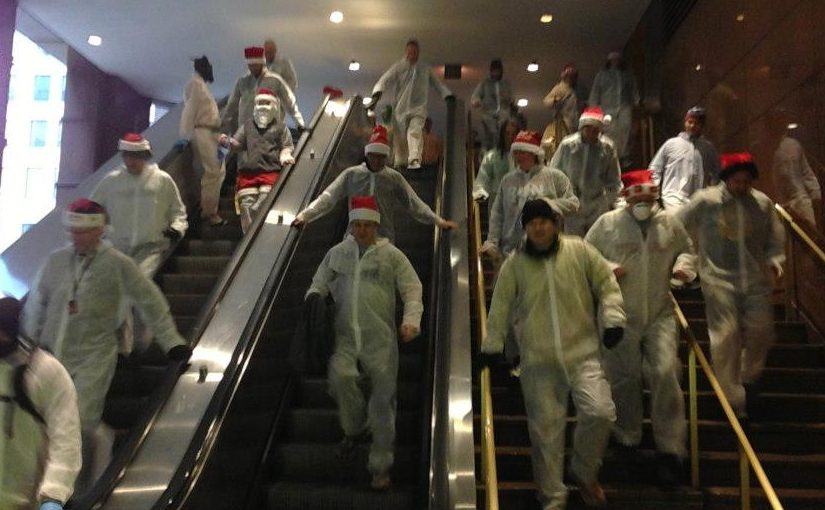 Another typical small hash due to the holidays hopefully the 50-degree weather this weekend will see a larger group of hashers out. JUST I LEAN laid trail for the second time in week with JUST JONATHON. They laid a trail that never made its way more than ½ mile from the bar but it wound around so much that it seemed that we ran over 3-4 miles today

JUST BILL had too much beer before trail and had to take a break behind one of the local trashcans. JUST KYM did claim she was out of shape but she seemed to keep with the pack very nicely. MOUTHFUL OF MEAT and RENTA a VIRGIN kept to the back of the pack and had a nice conversation on trail. They even found a perfect short cut back to the bar. JUST KEVIN was a bottomless beer pit maybe we should charge him double hash cash for drinking all of the beer.

VIRGIN BANGER even rolled out of bed to make it too the hash that was a few blocks from his house. JUST LOU decided to even make an appearance today at the hash. We eventually made it to the beer stop with JUST JOSH leading us in to an old style beer stop and we killed that 30 pack between all of us.

We got back the bar and I ran the circle I put OR-G in between all of the virgins so they we have someone nearby that knew all of hash songs. JUST ROB was punished for being a wimp and not running today but we forgive him NOT!!! Well the hash was fun and OUR hares JUST I LEAN and JUST JONATHON found a really great hash bar. Hope to see you this weekend when we have 50-degree weather.