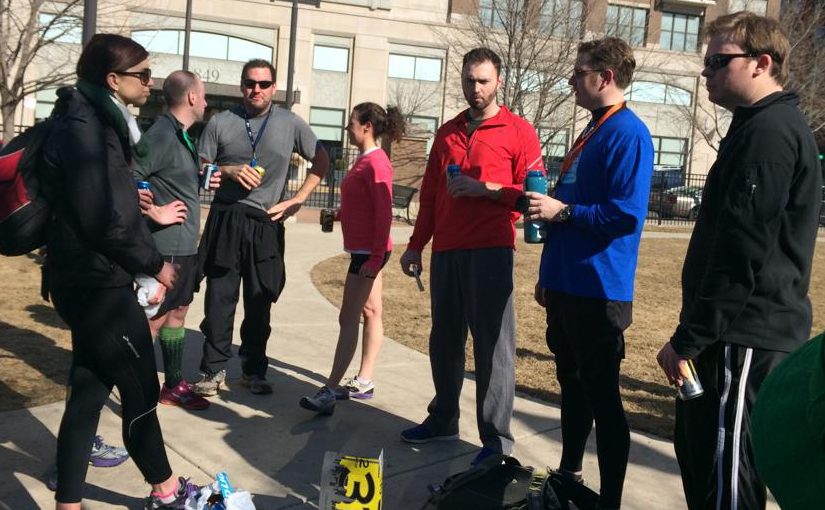 Last weekend five ladies (PACKhER ASS, LIKES IT ON THE BOTTOM, MOUNT SCHWIIINGA, JUST LAUREN, and SALTY GASH plus one rotten WHORE put on the yearly POP (POWER of the PUSSY) hash. The turn out was high with over 60 hashers showing up for the event and the laughs and fun will last forever. Nice job ladies!!! The Planning for the event began in the beginning of JULY when the ladies asked me if they could run POP. A date was picked for the hash in mid-JULY when the Chicago October hash calendar was empty of hashes for the Oct. 12-14 weekend. The T-shirt design was done by our own MOUNT SCHWIIINGA with the trail being devised by LIKES IT ON THE BOTTOM. The other 3 pussies, PACKhER ASS, SALTY GASH, and JUST LAUREN, provided logistical support.

The weekend kicked off with a pre-lube party where the CH3 raised around $200 for Breast Cancer Research, this brings the CH3 donations to charity well over $1000 for the whole year. The Flagship event began at 2 p.m. Oct. 13 with the weather being most cooperative. The hash ran under cloudy skies with a temperature of 65 degrees or perfect running weather. I wish we could have had this weather for the Chicago Marathon!!! The ladies greeted us at the door adorned in their Marilyn Monroe outfits so blondes were everywhere. The hash greeted our visitors in from BIG-HUMP, 2 F*** CANNUCK, SEXORCIST, and RICKYS CRAB SHACK.

We also had Waukesha hashers in the form of #2, TOILET ECLIPSE, JUST MARY, and HAND SOLO. Later in the evening the INDY SCENT hashers showed up in the form of OPP, SUCK ME DRY, and GAGGING ME SOFTLY. The hash lubricated itself with beer and around 2:45 pm the hash did chalk talk. VIRTUALLY HUNG was stuck carrying the flag today and JUST ALLEN and I were stuck wearing schoolgirl skirts and football jersey’s due to a lost bet a couple weeks ago.
The hash took off Northeast and found its first problem around the Illinois Masonic Hospital. The trail went up through the parking lot and back down. Numerous hashers like JUST PATRICK, JUST MOLLY, JUST ALLEN, and others decided to short cut the trail because what goes up must come down, the problem was where would the trail come down? Eventually the trail did run up to Halsted and then North to the Belmont El line stop.

This was the shot stop on the trail and TOO MUCH HEAD seemed to love giving blow job?!?
SHOTS to the hashers cumming in for the quick rest. ROTTEN WHORE looked she had just blown a whole battleship full of sailors with all of the leftover whip cream around her mouth!! SEXORCIST had the inverted whip cream treat as well. After the brief rest and shots the pack was back on trail angling northwest. JUST ALLEN, SPERM DIVERSION, VIRTULLY HUNG and I seemed to be leading the pack at this point and about two miles down trail we ran into the backyard of MOUNT SCHWIINGA. I took a seat but soon had to get up because JUST CORINNE, TOO MUCH HEAD, HOT LIPS, and others kept trying to see up my skirt!!!

The pack was treated to some fine beer, but the piece de resistance was the penis piñata. CP had first crack at the big dick but missed it completely. Next up was MOUTHFUL OF MEAT who seemed to need batting practice as well. MUDSUCKER took a whack at it and started the eventual down fall of the massive prick. Finally and mercifully ODOR eater like Chris Farley in the great white ninja blindfolded himself and put a huge wallop into that phallic that it spit out its finally death blows. Out of said phallic came Chocolate, sweet tarts and other prizes which will be given out this Sunday to the no shows.

The pack hit the pavement and was running along until 69-CENT MAN found a bus playpen in the garbage. He put the costume on but soon tired of it and gave it to JUST SAUD and I. We ran with it on until we got to the finally beer stop at Wrightwood Park. Along the way we must have given out 50-60 hash cards to interested onlookers and when we got to the park the Kick ball game stopped to give us a funny salute. ROTTEN WHORE womaned this stop and was very self-conscious of her appearance because numerous innocent bystanders were giving her strange looks. The bus finally arrived and the Ladies had games ready for us. I was on a team of JUST SAUD, TOO MUCH HEAD, JUST SAVITIA, and JUST KRISTEN. We played izzy dizzy and many hashers were soon on the ground from a lost sense of balance and direction. I believe the winning team had 69-CENT MAN, JUST PETER, #2, JUST MOLLY, and JUST KATHERINE on their team.

The pack played in the park for about ½ and then staggered back into the ON-IN at the Chi-town tap around 5:45 pm, but not before SALTY and PACKhER jumped into a pair of granny panties together.

Back at the On-In we had a short delay until the circle was started by PACKhER ASS and MOUNT SCHWIIINGA. They did a masterful job in running the circle and received the cooperation of the circle in general and if they didn’t ROTTEN WHORE spoke up for them with RESPECT!!! The hares were publicly pissed upon and our visitors were acknowledged and thanked for making the trip. Our virgins, Just Ernst, Just Kristen, Just Savitia, and Just Jonathon were in shock of what they had done today and what they had seen. The FRB’s were SPERM DIVERSION and JUST JULIA. SPERM DIVERSION on a side note could barely stand at the end of the night. The POP celebrated the past POP members in MOUTHFUL OF MEAT, ROTTEN WHORE and MAGNETIC MUFF. They even punished the NRB’s JUST TOM, MOAN, OPP, GAGGING ME SOFTLY and SUCK ME DRY. The BUS drivers and passengers made a second appearance and drank for garbage picking. RENTA VIRGIN and VIRGIN BANGER were called on for something but I can’t remember by this time I was getting drunk. JUST ALLEN got the sleeve today and somehow managed to drink from it with out spilling?? Food was served and the circle went through the motions of hash religion and ate.

Afterwards the hash decided to play a few games of Flippy cup with MOAN ON TRAIL leading the game. Participants included BATTERIES, JUST ALLEN, JUST MOLLY, ODOR EATER, ROTTEN WHORE, SPERM DIVERSION, JUST SAUD and others. The games lasted long and kicked SPERM DIVERSIONS butt because he threw up the game pieces after it was long over. From here I am at a loss for words but I do remember that the POP committee got some free shots by flashing the bar tender!!!! Overall the ladies did a nice job and the hash waits in anticipation for the 8th ANNUAL POP. We also like to thank the ladies for making us a new hashshit award, which is now a 2 foot pink penis. Towards the end of the night we did name JUST LAUREN. The suggestions were JANE DOE, MY ASS IS UP FOR GRABS, TURN AND COUGH, and ON MY KNEES AGAIN. After great deliberation amongst the hashers JUST LAUREN is now “MY ASS IS UP FOR GRABS!!!” Congrats!!!