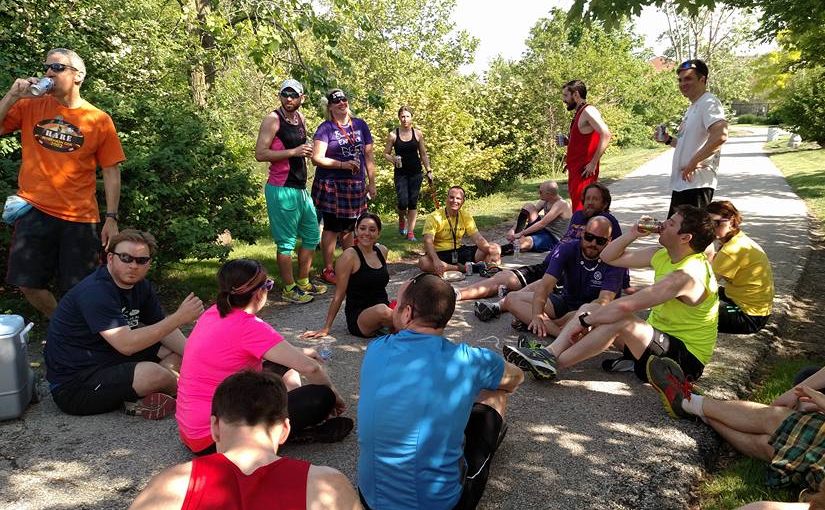 This hash was billed as a birthday hash for EZ, VIRGIN BANGER, and STUMP HUMPER. 38 hashers showed up for this birthday hash. The venue was set as the turtle racing capital of the world, Joe�s on Foster. STUPID MAN was the first to arrive and he talked about his two high school boys that play football. I have never seen them play but they are supposed to be top players in the state. One is a quarterback and one a wide out. I would love to one day hear the call STUPID MAN JR. to STUPID MAN JR. for a touchdown. More hashers began to arrive and Chicago welcomed FLAVIO and JUST DUSTY in from San Diego via Lambeau where their beloved Chargers lost to the Packers over the weekend. Who said hashers don�t watch football? We also welcomed 4 virgins that showed up early to run with us JUST JOHN, MARC, MANDY, and AMANDA.

The hash began around 7:30 pm with a chalk talk from the hares and the pack was off. VIRTUALLY HUNG was the early pace setter down an alley followed closely by old man HORN-E. The trail wound its way towards Lawrence but not before the pack went through a park and climbed over a fence. JUST MARC was really getting the hang of the hash because he was the FRB tonight. 69-CENT MAN with his reconstructed knees kept plodding along. The trail went through the usually hospital area where JUST KATHERINE spotted trail come through the large parking lot and called the pack to follow. It was in this area where the unfortunate JUST MANDY lost her car key? Virtually Hung again found himself up front with ROTTEN WHORE and they worked their way through Welles Park, and on under to the el-train. All along the trail MOUNT ME PUH�LZEE�s cranium reflect the full moon that was out in force throughout the night. The pack found the trail making its way to casa de VIRGIN BANGER where the pack was met by a short cutting STUPID MAN and the beautiful RENTA VIRGIN. Heinekens for all!!! The Pack enjoyed the friendly confines of the VIRGINS backyard. OR-G, JUST PATRICK, JUST JOE, and CUMS IN MY ASSFAULT all sat back and popped a beer.

The pack stayed for 20 minutes plus at the beer stop and then went back to the bar. VIRTUALLY HUNG ran the circle and punished STUPID MAN for being the FRB. JUST MOLLY and JUST KATHERINE were the FBI�s. The GM even remembered to give ASSPOCKET her lanyard and whistle she rightly deserved, of course the birthday people got their birthday down down too.