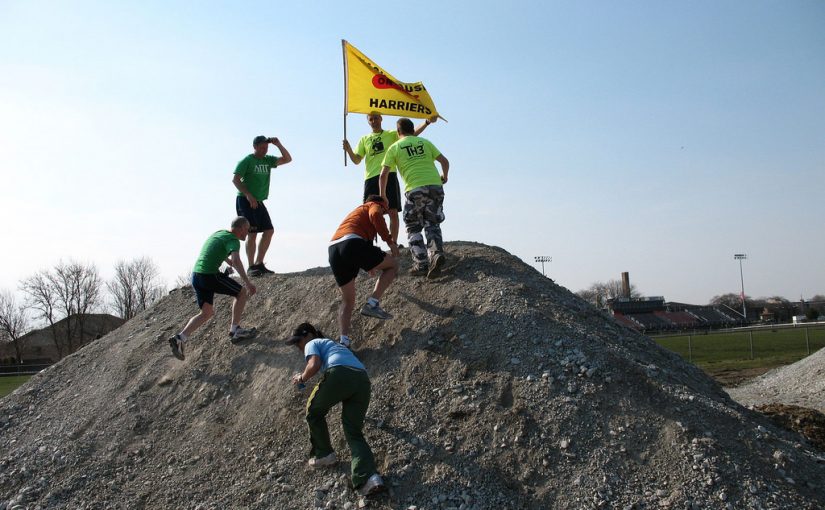 The hash started from the familiar confines of J & M Tap at 7:30 pm after the hash got time to greet OH SHIT!! from SF and got properly lubed up with beer. The three musketeers of JUST GORDAN, VIRGIN BANGER, and ASSPOCKET gave us a chalk talk while MUDSUCKER tried to hit on a new blond hasher asking for directions to next weeks hash. The hash went North and OH SHIT and JUST JIM picked up the trail going east after a check. We passed numerous churches on this run with golden domes that signified the Eastern Orthodox religion. The trail went north with the pack following RHOTAN as the new FRB. We came to the high school of Clemente and found a bad check that led us north again through a parking lot. I got lost on trail here and somehow wound up being the FRB running thru the alleys picking up a stray mark on trail. Horn-e caught up to me by short cutting and soon we were working together looking for trail near the corner of North and Damen. I finally found trail going through a park and around its fountain, but TWO TICKETS, RHOTAN, FAGNOSTIC, and LEARNING TO BLOW caught me again. I cut out to Milwaukee Avenue and saw ORGE running right at me on trail. I made another wrong turn but soon made it to the beer stop at SMELL THIS’s casa. We picked up a new virgin, JUST LISA, on trail and it was funny to watch hashers like HORN-E, JUST CHRIS and others take their turns drooling over this pretty blonde!!! The hash stayed here for about 10 minutes and left for a second beer stop. As we were cumming down to run HOOKED ON TONICS, BONER, JUST FAITH, and JUST PATTI with OH SHIT!! Were just arriving oh darn! The trail wound through Wicker Park and finally finished at the other house of VIRGIN BANGER. I didn’t know he was a slumlord? The pack enjoyed another beer stop and waited for JUST HEAHER, JUST JOHN, and JUST JENN to arrive. I ran back to the beer stop with LEARNING TO BLOW to buy humongous quantities of beer for the thirsty hash when they arrived.
The Pack entered the bar and took over the place. NRB’s ITS TOO SOFT, AT YOUR CERVIX, RENTA VIRGIN, HOT PANTS, CARPET SHAGGER, BARKS ON ALL FOURS and MAN A WHORE joined the circle. The FRB’s were ORGE and JUST CHRIS because we had two beer stops. The DFL’s were JUST PATTI, JUST FAITH, JUST TOM, and OH SHIT!! Punishment was given out to AT YOUR CERVIX for being really late, and RHOTAN got a down down for being himself. JUST TOM our new virgin was advised of rights in the hash and shown how to do a proper down down by ORGE. HOOKED ON TONICS was being her usual playful self near the entrance to the cooler, and BONER really loved it. JUST ROBIN will now have new Chicago haberdashery, and the GM forgot to give ASSPOCKET her whistle and lanyard. SPOTTED COCK was showing great interest in the Bears game, which the BEARS did win 27-24 that night. JUST LISA assures us she will be back next week but had to leave early to get back home for all of the guys out there!!!
Finally the circle was closed but was soon reopened for namings. The CHICAGO HASH brought JUST PATTI JUST FAITH, and JUST JOHN into the circle for possible names. two of these hashers have been hashing for over 7 months before they have been named and they received a name that even has a story behind! JUST PATTI has been hashing since December and she has an interesting talent of being able to do the splits against the wall. Suggestions for names were wall banger, wall pounder, and spread’em wide, but her name will be W’all BANGHER. JUST FAITH hash hashed now for 7 months and early in the evening said she didn’t want her loose lips to give her a name. She should have told that to JUST TOM, her roommate, because after his loose lips spoke we named her ANAL ASSAULT. Finally, we came to JUST JOHN who has hashed since May. He made the mistake of wearing his man bag to the hash and it was bright green. The hash picked up on this and tried to name him man sac, man bag, hairy man sac, toxic man sac, but he will be known as MOLDY MAN SAC!! Congrats on your names and your funny stories that go with them. Thanks also to the CH3 for waiting to name these people for over 7 months, in one case, with a great name. Now we need to work on names for JUST CHRIS, JUST HEATHER, and JUST JENN who have been hashing with us since May.