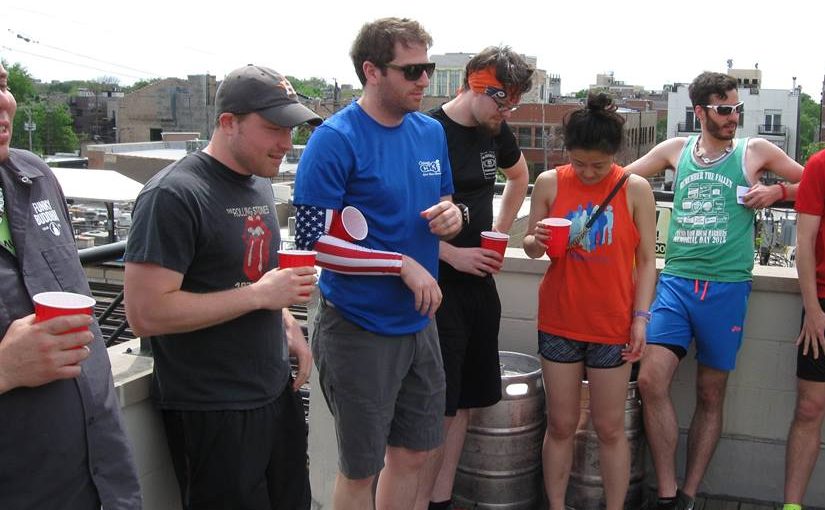 The Hash started from a new bar in the DePaul Neighborhood. Kelly’s is located just east of the Sheffield & Webster corner and has a beer garden in the back and for future reference it has 20 parking spaces next to the building located under the EL tracks, you just have to have your car out by midnight. The pack got a chalk talk at 7:30 pm in front of the bar and numerous patrons were interested in what we were doing. VIRGIN BANGERS business cards sure came in handy because we were able to pass many of them out to DePaul students this night. CHICKEN STIFFER gave the chalk talk but was competing with the EL trains overhead in a battle of who could be the loudest. I lost. The first mark was a check and the pack was off. HORN-E went east and was lost CALVIN went south but took the incorrect split. FLYING HOOTERS and TWO TICKETS TO A PAIR THIGHS though were all over the first check and found true trail. The trail went through the alleys and jogged right towards the DePaul campus and courtyard. CAPTAIN CRUNCH was seen trying to pick the correct route after the next check and even found the short cut to the next part of the trail. Unfortunately he missed the mark that sent the trail across the street and had to send the pack back to the last mark. The trail crossed Fullerton and went east down an alley behind the closed Blockbuster. Here the hare heard EZ on the ASS whine about no one calling out a check but he was DFL at this point so who cares. The pack wound its way around the old party central and PUSSY GALORE didn’t even take the short cut that the hare was offering her, Way to go girl!! CP, JUST PETER, and JUST STEVEN did follow the hare and stayed in the alley behind old party central. The pack went east again and found itself at a split on Lincoln. VIRTUALLY HUNG found the correct split and soon was heard blowing his own whistle behind Children’s Research facility where MOUTHFUL OF MEAT works.

Together with MR. CHEESECAKE, VIRTUALLY HUNG found that the trail cut between two houses with little more that 12 inches to slip through to get to the next alley. PUSSY GALORE was heard to say, “I can’t go through there!!” JUST ASHLEY just in from Purdue was seen jogging with her sister, JUST LORI, were those two twins?? The front of the pack next hit the major 7-mark check back, which allowed he tail to catch the head of the pack. CALVIN found the hidden mark on the school ground and quickly hopped the fence to continue trail. BATTERIES NOT INCLUDED kept up her usually pace and lopped along. The trail went east towards Clark Street but cut behind an alley. Here the ladies of the pack found some of the best looking Chicagoans drinking swill and sleeping behind the stores of Clark Street. I hope nobody stepped on that guy sleeping by the dumpster. JUST AMY and JUST KELLY informed me later that they were startled by this toothless wonder. The trail ran into the Lagoon area of Lincoln Park, and the hare called out to hey yellow t-shirt girl follow me to the next mark. Yellow t-shirt girl was JUST CARRIE and she walked with BNI, CP, and I to the shortcut. The hare then jogged back along the trail to find 5 lost hashers and he find them he did. JUST AMY, JUST KELLY, JUST PETER, JUST STEVEN, and MOUNT SCHWINGA were taken post haste to the beer stop where we found LOWER WHACKOFF wandering around the neighborhood looking for BEER. The Beer stop was at CASA de CHICKEN”S parking lot, but it still amazes me how many times I can keep people completely lost in tying to find it. How many times have we been there 10?

The Beer stop was 20 minutes long and the pack made it back to Kelly’s pub. The back beer garden was perfect for our group of 30 and the weather was great. The pack enjoyed the $5 pitchers that were offered this night and CALVIN got the circle going. Numerous thanks go out to those that helped me run the hash tonight. VIRTUALLY HUNG took hash cash. EZ, MOUTHFUL, FIST, CP, HORN-E, HOOTERS, and TWO TIKS were seen ferrying beer to the back from the front bar, so thanks again. The hash gave out numerous down-downs for violations but one of the memorable was CALVIN drinking for his love of Stars Wars on George Lucas birthday. The virgins really seemed to be having fun and JUST CARRIE was rolling in laughter at our perverse verses. SMELL THIS and VIRGIN BANGER walked in and could have been mistaken for the regular crowd with the pushed up collars on their polos. PETERBILT also walked in carrying his nuts………..in a bag, oh you people are sick. Finally our own Hash flash showed up in ITS too SOFT. I can’t wait to see the pictures from this hash. Well we hope you virgins, JUST JON, JU JENNY, JUST CARRIE, JUST PETER, and JUST STEVEN, had fun and remember your 2nd Chicago Hash is free!!!