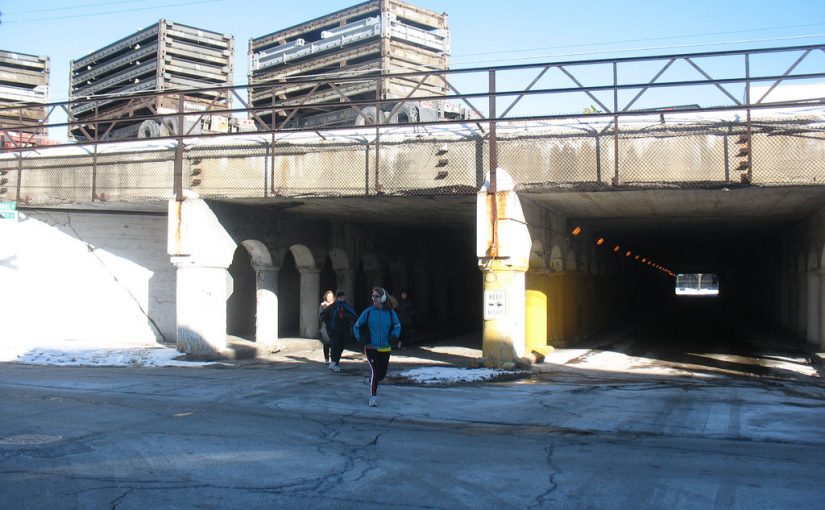 The trail started from Paddy Mack?s at 4200 N block of Pulaski. We had Sir Poops Alot, Special Head, Agador Spartacus, Lifa, Chicken Stiffer, Its too Soft, Mount Me and Coffee with Just Hannah, Sugar Nipples, Just Gunner, Leisure Suit Larry, Erect the Red, Milk-my-Yak, and Barks on All Fours start off on trail. The trail went North up Pulaski where there was a major check on the corner of Pulaski and Montrose. It was there where the pack got really confused because at first Chicken Stiffer couldn?t count right and missed the trail going west because he couldn?t count up to three marks. After about 20 minutes and with the help of Bushwacker, the hare, Lifa was able to find trail heading back South West but it would have helped if the hares had used a curve or arrow to denote a turn on the trail. On trail Leisure Suit Larry kept talking about his trifecta of the week, which was completing the TH3, Moon Hash, and CH3 in four days, what a racist. It was fun to watch
Just Gunner drag Sugar Nipples all over the pavement today. When we got to the beer stop Sugar Nipples asked for the FRB?s to take Gunner next time and wear him out. Those whistles on trail do help people alot Sir Poops and Chicken were able to home in on the trail because Lifa had his whistle to direct the pack to On Trail. The pack kept running SW until we got to the Kennedy underpass at California. There after another check the trail continued SW where it went through some streets and a house under construction. The FRB set up a trap consisting off garbage cans blocking the gate exit. We heard later that Mount Me and others had to circumnavigate this obstruction. The beer stop was at CP?s place near Belmont and the Milwaukee tracks, where we found Milk, Coffee, and Barks eating chips and drinking beer. Just Hannah has come in very handy lately because she has been the ?BEER BUGGY?, maybe a name in there somewhere?? CP & Bush were great hares because they provided not only DRINK but FOOD at the Ssop and all were happy, but where was Erect the Red????

The On In was at Brudders at Addison and Pulaski, where CP arranged $5 pitchers for the hash WOO HOO more Beer. It is at this point that Mudsucker and Bloody Thighs made an appearance, Mudsucker was distraught over the loss of the Bears that day and drowned his sorrows in a beer and burger. We also found Erect the Red waiting here for us. Mudsucker also announced his Chili party for next Saturday at his place WOO HOO more Food!!! We also found out via the Hash hotline that Calvin our RA had jumped from some precipice after the Bears loss dislocating and breaking his ankle Lets sing him a song ?DONNIE THE RETARD HAD AN………….?. On a side note where are all those hashers who voted not to push the start time of the hash back to accommodate Bears fans??? The Bears fans are showing up after the game but you ?NO? votes are not coming out at all for the trail and we know who you are. Next week the Hash will be out of the Ravenswood Pub in the 5400 block of North Ravenswood wear you Camo gear for Veterans Day and the Bears play at night with a Bears party at FUJI?s afterwards. Also we will have a MISMANAGEMENT MEETING FOR CH3 on NOV. 19 before the hash so come to the meeting and also watch the Bears play the NY Jets.