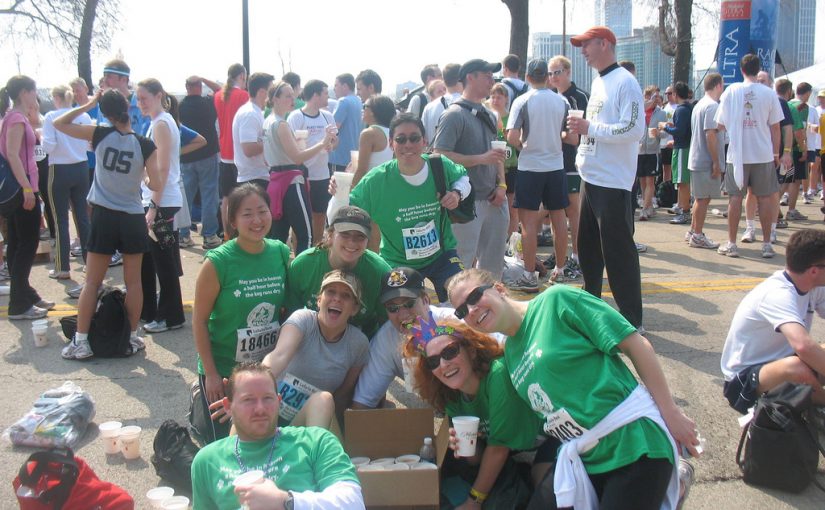 Running with the Bulls Horn

Running and drinking. Two activities most people keep separate. Not the Chicago House Harriers; a different kind of running club which may appeal to those who always wanted to compete in a triathlon but don’t like cycling, can’t swim and like to drink beer.

They meet at Simon’s in Andersonville at 7:15 with a tradition of being late.

A typical run is three or four miles long and winds through alleys, goes in circles, over tracks and through the woods. You run at your own pace. “Our runs are similar to playing kick the can or ghost in the graveyard as kids,” Batteries not included said. “It’s all about having a fun run and not taking it so serious.”

The Hare (the designated person to lead) marks the sidewalks with chalk for the hounds (runners) to follow. Turns in the trail are signaled by whistles and horns to alert the Hounds.

This was the Chicago Hash House Harriers Full Moon Run which wound through the Andersonville area down foster and to the lake. The half way point is a special point, Beer Stop Bob Beer Stop Bob was waiting with cold (no peek in the paper bag) beers. where there was a perfect viewing of the full moon reflecting off of Lake Michigan. The break was for a few beers except for a few who chose not to imbibe. The run went full circle when everyone ran back to the bar and continued the tradition of the Hash House Harriers.

If you would like to experience something completely different the Chicago Hash House Harries run every Sunday afternoon and Thursday evening. You can visit their website www.chicagohash.org or call their hot line 312-409-BEER for more information

Whazzup’s 2 pix can be found here.