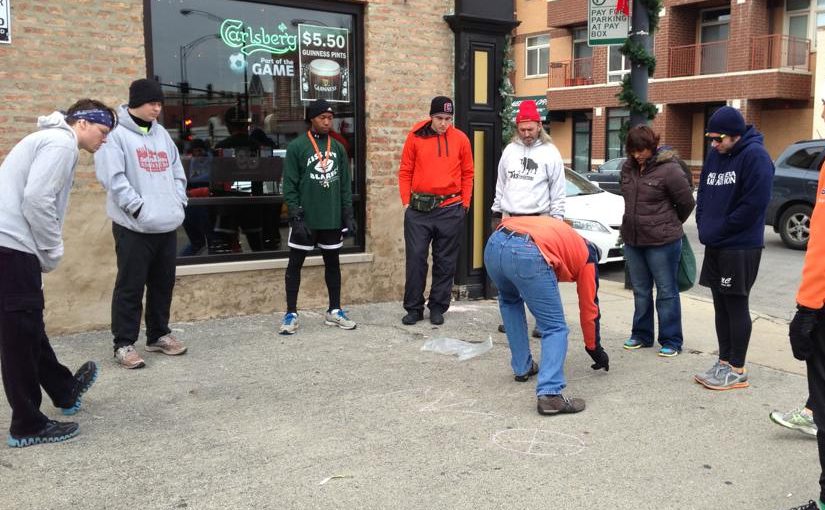 Hey Ballas – ARE YOU READY FOR SOME KICKBALL!!!??

February Madness is back again for 2015 with “Lunatic Bowl XV” on Super Bowl Sunday in the traditional frosty confines of Jonquil Park in Lincoln Park. Yes this sounds completely insane but just ask anyone who’s done it before… you just can’t pay for this kind of entertainment!!

Here’s the tradition – on Super Bowl Sunday Festa’s old school crew would gather at Jonquil Park (Wrightwood, Sheffield & Lincoln) around 10:30am for friendly game of kickball in the snow and to have a few drinks. With orange traffic cones as the bases (regular white bases don’t show well in the snow) and there would be traditional “team meetings” between innings to take hits from a bottle of Mad Dog kept under the second base cone.

A group of 12-15 is ideal and it’s a great warmup for all those Super Bowl parties later in the day. As you are playing kickball in the snow (and some are also drinking), little or no athletic ability is required or makes much of a difference. Yes, this is the same game of kickball we played in third grade.

In keeping with ritual and tradition the 2015 game will be held at the spiritual home of Festa Super Bowl Sunday Kickball, Jonquil Park at the intersection of Wrightwood, Sheffield & Lincoln. It’s also close to environmentally-friendly public transportation (Fullerton Red/Brown Line, Sedgwick 37, Fullerton 74, Halsted 8, Diversey 76 and Clark 22 buses) and parking is usually quite ample for Beverly Hills 60614 as it’s Sunday.

Note this is a Chicago Park District property so please don’t show up with a half barrel, a case of beer or other conspicuous alcohol. Bottles in bags or pre-mixed drinks have done us well in the past.

I will bring all the sporting goods (traffic cones and foursquare balls) for the game thanks to my participation in kickball league in Milwaukee back in the day so just come as you are and bring yourself and your favorite refreshment i.e. “warm you up drink” (like schnapps, hard cider, Mad Dog, etc) or any nonalcoholic potables for those so inclined.

I will try and get Festa himself to make another celebrity appearance at this event he originally founded back in the ’90’s for a classic matchup between Team Fuji “the Harlem Globetrotters” vs. Team Festa “the Washington Generals”.

As always there will be lots of post-kickball actual Super Bowl (the other game that day) activities to choose from and postgame we’ll probably have a drink or two and warm up at a nearby tavern as there are a “few” bars on Lincoln between Fullerton & Diversey.

A few quick things to keep in mind:

1) Please remember this is the beginning of February in CHICAGO so despite alleged global warming it will likely be VERY COLD and usually there will be snow on the ground so please dress appropriately. Speaking of which, this is an outdoor game so wear something you don’t mind getting a little dirt/mud/grass/snow on if you plan to play (cheering sections are welcome too).

2) I will be there a little early to setup. Games will start after we get rough quorum and run as long as people are in the mood to play.

3) Please remember this is a Chicago Park District park so those who want to bring “grownup drinks” please be discreet. Note that many of us are watching some sort of football game afterwards (likely with more grownup drinks too) so pacing is not a bad idea.

4) The other usual playground rules apply – three strikes is a strikeout, as is a foul ball third strike (like in softball), there are no walks (everyone has to kick!). Runners cannot lead on bases and deliberate throws to the head are discouraged. Teams will be chosen odd/evens (avoid the dreaded “last picked in gym class syndrome”) and best out of three in rock-paper-scissors will determine which team kicks first.

5) Please don’t forget this is for fun. Those deemed “playing too competitively” may find themselves doing penalty shots of Mad Dog and/or Boone’s Farm. And don’t make me bust out the Malort. We will have longer than usual between inning breaks for folks to socialize too (another tradition).