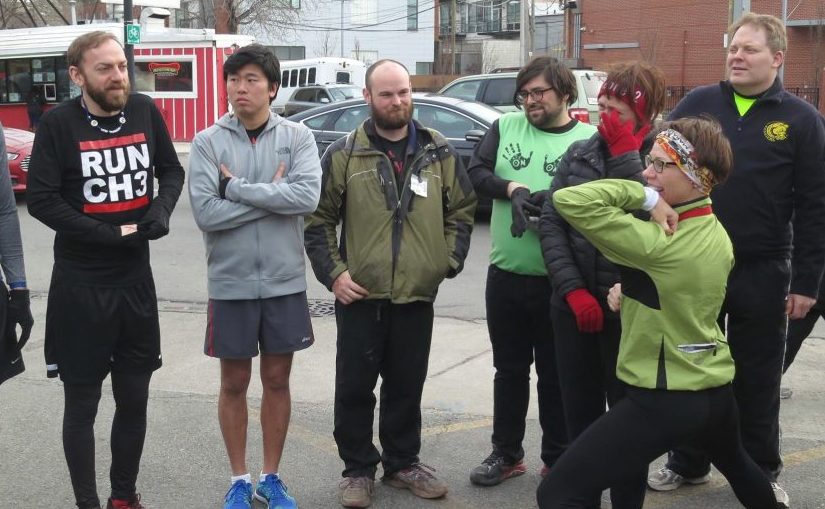 For two sticky hours, Dean Giannasi joined a pack
following a trail of chalk marks through the alleys
of
Northwest Chicago, blowing whistles, shouting
nonsense and scrambling to overcome wrong
turns. By the time he reached the finish line, he
was
sweat-soaked and primed for the reward that marked
the end of his first hash run.

“Everyone keeps their eye on the ball, which is the
beer,” said the 37-year-old Chicago firefighter, gripping a
cold one. “I’m very proud to be associated with it.”

Of course, that was before his fellow runners
started drinking out of a bedpan.

The night was a bracing introduction to the weird
world of hashing, a phenomenon that is equal parts workout,
treasure hunt and frat party.

Hashing sends runners along winding, intentionally
misleading paths and repays the effort with ritualized
debauchery at the finish line. It’s a formula that
has caught on from Brazil to Burkina Faso and spawned at
least four hashing groups in Chicago.

“I like running. I like beer. It struck me as
ingenious to combine the two,” said Dawn Klingensmith, a
30-year-old freelance writer who runs with the
Chicago Hash House Harriers.

Some accounts say hashing began almost 70 years ago
in Malaysia. Bored British expatriates, meeting at a
restaurant they dubbed the Hash House, decided to
put a twist on a schoolboy game in which a lead runner
left a trail of shredded paper for his comrades to
track.

The expatriates’ innovation was simple but
revolutionary: At the end of the path was a tub of cold beer.

Tami Hoffman, 44, a Chicago attorney and experienced
hasher, said pairing a respectable sport with a bit of
decadence opened a new social realm.

“You have your grown-up life but can get together
with your buddies, act like you’re in college for four hours,
then go back to your old life with–hopefully–no
repercussions,” she said.

Most hashes begin with a course designer, known as
the hare, laying down chalk arrows or other signs to
direct runners along the trail. Chicago hashers used
flour until 2002, when authorities found the white powder
markers and evacuated the Lincoln Park Zoo in a
bioterrorism scare.

Deception is part of the game–split arrows send
runners in two directions, and only one is correct–and
solving the puzzle is a group effort that equalizes
faster and slower runners and keeps the focus on
socializing. For an extra dose of harmony, a beer
stop usually waits halfway through, and a full-blown party
comes at the end.

The Chicago Hash House Harriers run on Monday
nights, advertising the meeting spot on the Internet. One
recent outing began at an Albany Park bar, where 25
people, ranging from lawyers to the unemployed,
gathered for the start.

Most followed the custom of adopting hash nicknames,
many of which can’t be printed in a family newspaper.
E Foertsch, 63, a lean and ponytailed Chicagoan,
called himself Horn-E, ostensibly for the makeshift bugle he
totes along on runs.

He was a 19-year veteran of the chase and sported a
medallion proclaiming him a grand master. He said he
had hashed from Atlanta to New Zealand, developing
along the way a fondness for red-dress runs in which
participants must wear red dresses.

“I’ve been to 15 of them,” Foertsch said. “I’ve got
more red dresses at home than any girl out there.”

The runners started en masse but quickly dissolved
into small packs. They darted through the garbage funk of
alleyways, across the emerald lawns of North Park
University and past a pickup cricket game behind
Roosevelt High School, all the while shouting “On,
On!” or blowing whistles as signals that they had found the
right path.

The commotion puzzled onlookers, including a driver
who leaned out of a pickup truck to ask why everyone
was running. The answer–“Beer!”–prompted him to
hoist a can.

The group took a break mid-course at a bar for a
quick drink, then resumed the pursuit. But by the end of the
roughly 4 1/2-mile path, with the chalk marks nearly
impossible to see in the gathering gloom, many slowed to
a defeated walk.

Finally, the hare drove past and pointed stragglers
to his nearby Irving Park back yard, which served as the
finish line. That’s when the party started, but like
so much in hashing, it came with rules and rites attached.

Mike Bendas–also known as Mudsucker–a 55-year-old
retired Army colonel and one-time congressional
candidate from Bridgeport, called the participants
into a circle and heaped earthy but good-natured abuse on
most of those present.

The penalty for drawing his scorn was chugging a
small cup of beer, a convention known as the “down down.”
The daring took their gulps from a bedpan, serenaded
by naughty songs borrowed from rugby teams.

While alcohol and rude language are typical in
hashing, they’re not universal characteristics. Jay Hopkins, 43,
a Northern Virginia hasher who helps run a Web site
dedicated to the hobby, said many runs are
family-oriented. “The athleticism, the camaraderie
is there, but you don’t have the silly names, you don’t have
the bawdiness,” he said. “That’s not an integral
part of hashing at all.”

Even the Monday night hashers, with their proud
tradition of intemperance, said that what they most enjoyed
was being with their friends and discovering the
hidden side of city neighborhoods. And besides, Bendas
said, other hashes are much crazier. “You go down to
Texas, those guys are wild,” he said. “We have a
reputation for being conservative.”